Wrapping up the Java port of my Tektosyne library (for computational geometry and graph algorithms), I recreated a number of UML diagrams for documentation, using my recently ported Class Diagrammer. That was its biggest project to date, and sure enough a large number of fixes and enhancements resulted. Class Diagrammer 2.1.0 is now available for download, with the following changes.

I added all remaining class stereotypes and member properties that I could find in the Java Language Specification. Note that Java unfortunately defaults class visibility to package rather than public scope, and lacks a keyword for package scope to boot. Since documentation diagrams typically consist of public classes, I continue to show these without any stereotype and instead stole the C# keyword internal as a new stereotype for classes with package visibility. (I couldn’t use package because that’s how I annotate actual package elements!)

A number of fixes affect layout positioning. Methods with variable arguments now appear with their Java notation (T…) which seems nicer than appending a {varargs} annotation.

Several redundant display items are now automatically suppressed, mostly on enumeration boxes which became much more compact. You may wish to adjust the layout of existing diagrams accordingly.

If you’re surprised by the last item, bridge methods are automatically generated by the Java compiler to accommodate type-erasing generics. They are normally invisible to the programmer but Class Diagrammer shows them by default – see the diagram in the next section. I’m considering a future update to selectively suppress field and method display by annotation, in case you don’t wish to see them.

Previously, all file output used the default Java Graphics2D layout resolution of 72 DPI. This is unproblematic for vector graphics (SVG/HTML, PDF) where the layout resolution only affects positioning, and all rendering occurs at whatever resolution the display device is capable of. However, it was really quite low for bitmap graphics (BMP/PNG, JPEG) and resulted in ugly pixelation when using these formats.

This is now fixed by internally upscaling all bitmap graphics by a factor of four. The resulting output resolution of 288 DPI is close to the standard printer resolution of 300 DPI and should be sufficient for most purposes. Now that Class Diagrammer’s bitmap output is no longer something to be ashamed of, I added an inline sample diagram to the home page and made a smaller one for this blog post, based on the upcoming Tektosyne release: 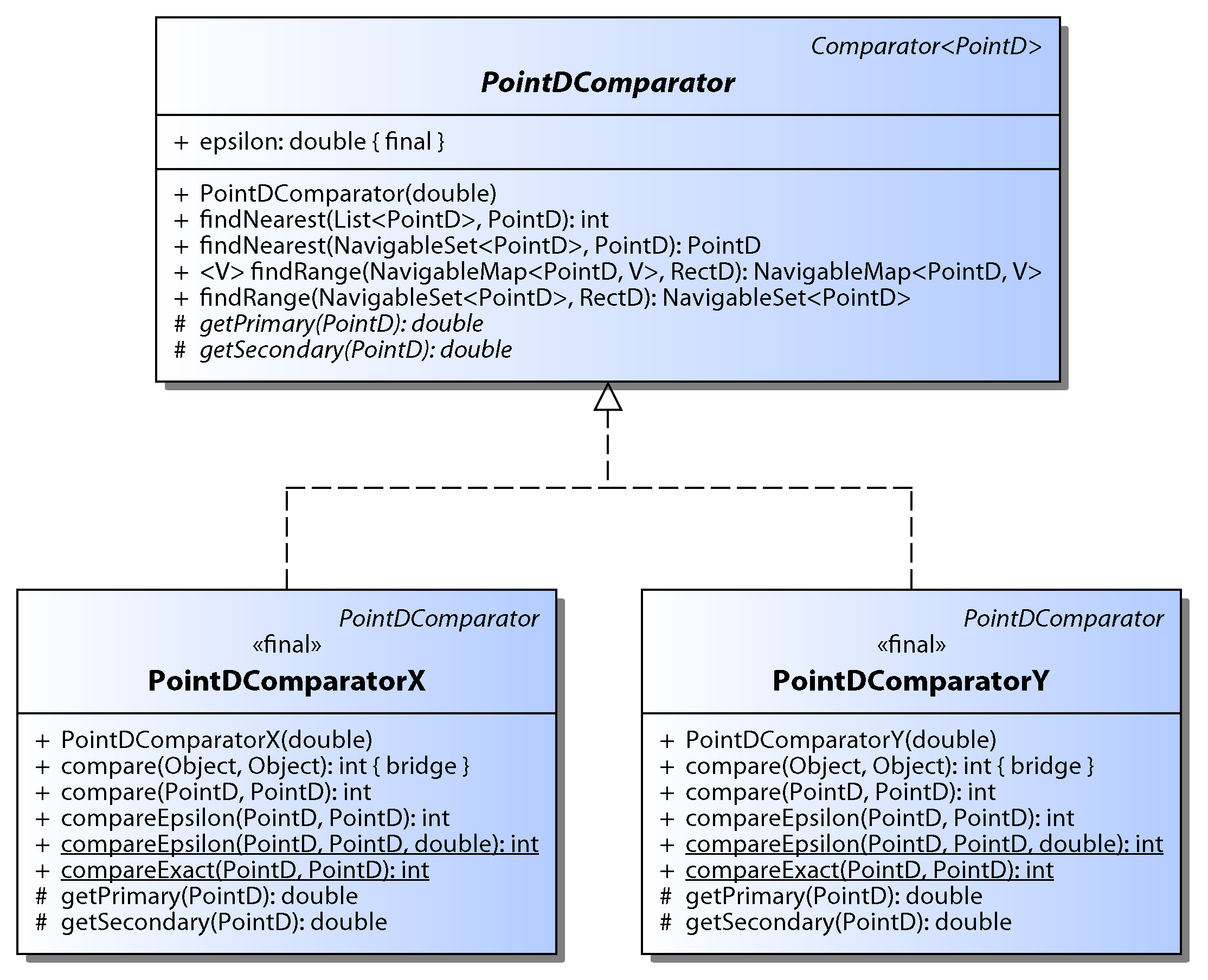 One inevitable drawback of higher bitmap quality are larger file sizes. PNG files are now slightly larger than PDF files which I think should be acceptable. JPEG files are monstrously large, though. Class Diagrammer output seems to disagree with JPEG’s lossy compression. I tried adjusting the compression ratio both within the application and with an external paint program, and failed to achieve significantly smaller file sizes without greatly degraded image quality. Perhaps you’ll have better luck manually creating JPEG files from PNG output – or just use PNG files.

There was one interesting implementation issue, too. I had to disable font kerning for the upscaled output resolution, or Graphics2D would misalign kerned character pairs. It seems that the current Java implementation does not take scaling transformations into account when positioning kern pairs. This does not greatly affect text quality, however.

Two fixes affect project files. Embarrassingly, these saved neither the application title and version in the header, nor any custom colors except those defined in global project options. Now they do!

As you can see in the previous section, I changed the default right color to a much lighter blue for improved readability. Also, the layout resolution is 1/72″ which is the default for Java Graphics2D, but the documentation still claimed 1/96″ which had been true for .NET WPF. This has been corrected.

Finally, there were several improvements to the GUI application.

I’ve recreated all diagrams published for my various projects with the new Class Diagrammer release. This includes the following (all files are in PDF format):