Should you have made the mistake of installing Windows 8, this is what you’ll see:

Look, a gigantic smartphone on my desk!

The new Start screen, full of colorful blinking tiles, informs you that the weather in London is “mostly cloudy” and that “aging Yankees face lots of questions.” Microsoft faces lots of questions, too, for example: what the hell is this smartphone UI doing on my 27″ desktop monitor? Having news trivia cycle through “live tiles” might be appropriate on a pocket device, pulled out to relieve boredom while riding a bus or waiting in line. It’s perfectly useless on a big work machine that nobody would look at except to run some other program that immediately replaces this entire screen. (Windows Vista/7 featured desktop gadgets that appeared alongside desktop applications. That could have been actually useful and was therefore removed from Windows 8.)

Two blocks of such tiles, many of which are patently useless on a desktop (a camera icon!?), take up most of the screen. Squeezed in to the right we catch the first glimpse of the actual Start menu, presented in as wasteful and disorganized a way as possible. Each entry appears as a gigantic colorful block, which a hidden function (right click, then click on “All Apps”) shrinks to a text-plus-icon line that looks almost decent… until you discover that Windows 8 ignores all nested hierarchies in the Start menu, flattening the view to show only the topmost folders. Still, this feature comes dangerously close to being useful, so Microsoft made sure to provide a more obvious mouse gesture (scroll to lower-right corner and click) that shows a totally useless text-free icon view! 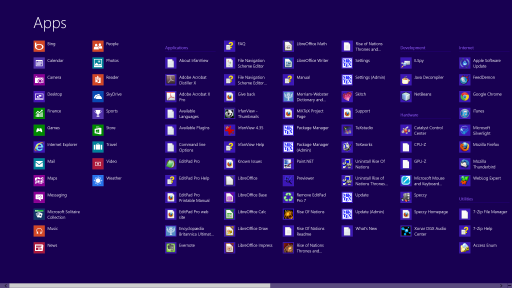 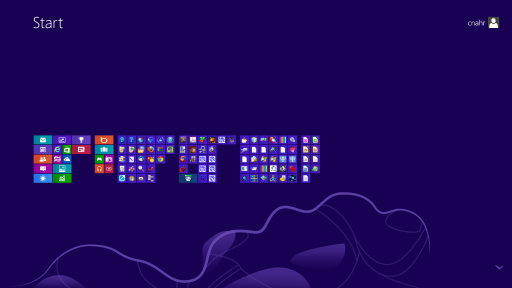 Why does this view exist? Seriously, why?

Needless to say, the first order of business is to install Classic Shell and recover the usability of previous Windows versions. Or almost, at any rate. For one thing, mousing around on the desktop can inadvertently trigger unwanted “Metro” features. At the top of the screen, a huge grab hand appears that lets you dock the desktop task switcher to the left or right third of a Metro screen. No, I don’t know why you’d want to do that either.

Moving to a right corner of the screen slides out five Metro “charms” that compete in uselessness. Search & Start just switch back to the same Start screen you just happily escaped; Settings invokes a simplified configuration panel that will only redirect you to the usual Control Panel for any proper configuration; and my personal favorites, Share & Devices, pop up a huge Metro sidebar majestically stating that “Nothing can be shared (or sent) from the desktop.” Thanks for letting me know, Microsoft!

Windows 8 entirely replaces several applications with Metro equivalents, notably Mail and all included games such as Solitaire and Minesweeper. Not only will these programs always run full-screen, no matter the size of your desktop monitor, they also require logging into a Microsoft account before they will even start. Mail is built around Windows Live Hotmail, and games are delivered through the new Windows Store. Your games account is always called an “Xbox” account, regardless of whether you own an Xbox, and occasionally shows terrifying Kinect puppets.

Solitaire, the one new game I tried, is clearly designed for touchscreens and suffers from a poor mouse implementation – right-clicking opens an irritating Metro menu instead of just sending a card to its matching stack. Regular desktop games still run, but the convenient Game Explorer from Windows Vista/7 is gone again. It’s patently obvious that Microsoft really doesn’t want you to play games delivered through any channel where it doesn’t get a cut. Good news for Steam on Linux, I suppose.

Microsoft does want you to associate Windows itself with a Microsoft account, similar to how iOS or Android devices are set up. Don’t be fooled by the installation procedure – the option is well hidden but you can in fact still create a regular (offline) account for Windows, and then simply use an additional Microsoft account when some Windows Store application needs it. While the setup itself went smoothly, I can’t say that the subsequent maintenance lives up to iOS or Android standards. Windows Update delivered endless waves of security fixes that required multiple reboots, and still fails to notify me of critical updates despite having this option selected.

Concerning Windows 8’s desktop mode, I’d be hard pressed to name any visible changes other than Explorer’s new “ribbon” UI. The “new” flat Windows theme that replaces Aero is virtually identical with the old Windows 7 Basic theme, available on every Windows 7 installation and easily activated through the control panel. Windows 8 did little but remove Aero, so if it’s the flatter styling you want just stick with Windows 7 and enable Basic.

As for other improvements, there’s finally a built-in PDF reader but only as a full-screen Metro app. And Windows 8 does boot faster than Windows 7… but only if you let it cheat. Specifically, Windows 8 “Fast Boot” relies on hibernating the kernel session. If you disable hibernation (powercfg /h off) to save space on a small SSD, this feature is also disabled and Windows 8 boots no faster than Windows 7. Unless you care about the new Hyper-V virtualization system, I cannot presently think of any other new feature that isn’t easily added to Windows 7.

The usual line of defense for Windows 8 is that much design innovation was lavished on the new Metro interface which was necessary for touchscreens. Therefore, it’s okay to let the desktop stagnate, and everyone who doesn’t like that is a clueless luddite. This argument rests on two fallacies: that Metro is innovative and without alternative on touchscreens.

First, the new Start screen and the concept of full-screen apps with gigantic buttons is not in the least innovative. Metro’s peculiar visual styling has been debated all over the Internet, but that’s merely a matter of taste and completely irrelevant to its functionality. In that regard Metro is a bog-standard smartphone interface, such as has been around for many years now. The only “innovative” part, if you can call it that, is to duct-tape that smartphone UI to a desktop OS while spending virtually no effort whatsoever to accommodate the radically different form factors and input methods. And that’s “innovative” only in the sense that smashing your head with a sledgehammer is an innovative cure for headaches.

But perhaps this was Microsoft’s only possible response to PC users flocking to tablets, as some have suggested? Here, too, I disagree. Blowing up a smartphone UI to tablet size is certainly the way how Apple’s iPad pioneered mass adoption of tablets, but Apple also has very little interest in creating tablets for content creation rather than content consumption. That might cannibalize their highly profitable Macbooks, and why sell one device when you can sell two? But if Microsoft’s goal is indeed to unify creation and consumption in one device, they walked right into Apple’s trap when they cloned the iOS approach to tablet UI. Their system is just as limited as an iPad but more expensive, less mature, and not nearly as well supported – who wants that?

What Microsoft Should Do

The first move to fix the sad mess that is Windows 8 is the simple and obvious one: pull the Metro part out again and make it strictly optional, return to investing in desktop evolution, and restore the distinction between handheld and desktop OS. That would concede the tablet market to Apple and Android for now, but it would also stabilize Microsoft’s existing strongholds and entice users to pay for another upgrade cycle.

The long-term plan needs to be much bolder. The new WinRT API is technically sound but must be matured to a point where it is fully competitive with desktop APIs such as WPF, and provide a window manager of near-desktop capabilities running equally well on desktop and touchscreen systems. That’s going to be much more challenging than just slapping a phone UI on the desktop but I don’t believe it’s impossible. For example, existing touchscreen devices already feature overlapping windows – namely in browsers and other multi-document apps. Such document windows are indicated by labeled tabs, similar to desktop task bars or tablet task switchers. The latter only pop up when requested, but that’s an artifact of their phone origins. Bigger screens should make global navigation functions permanently visible. Nor is it necessary on today’s tablets to forcibly suspend or kill every background app – that should be the user’s decision.

Tabbed windows aren’t the only option, either. High-resolution tablets can do better than Metro’s simplistic live tiles. There’s plenty of space to arrange multiple windows next to each other – think of the tiled view in Windows 1.0, running at a mere 640×200 resolution! Metro takes a baby step in this direction with its optional 1:2 split, and that needs to go much further. On a tablet screen, touch controls should require only moderate simplification and enlargement compared to desktop controls – Microsoft’s own touchscreen mode for Office 2013 shows the way. With a sufficiently powerful window manager, legacy desktop applications could be seamlessly integrated, running in their own windows alongside new apps, without the jarring Metro/desktop switch.

That is what I would call a bold and innovative system! What we got in Windows 8 is an admission of defeat, a failure to bring the power of desktop applications to touchscreen devices. But I don’t need another iPad, I already have one. What I want is a true Windows for tablets.

2013-02-26: David Smith’s Is It a Tablet? Is It a Laptop? examines the Microsoft Surface RT from a Windows 7 and iPad user’s perspective. He doesn’t particularly like it, but what I found most interesting is that his criticism of Windows RT on a convertible tablet mirrors my own opinion of Windows 8 Pro on a desktop:

I thought what we could be looking at here was a unified development environment where you could build an App and have one defined UI for a desktop user and another for a Tablet user, within the App if you wanted. That would have been brilliant. […] What we appear to have instead is a pretty crude touch UI slapped over the standard desktop interface. […] Shifting awkwardly between Modern UI and desktop interfaces just doesn’t work, and there’s no sense that they know when to do which.

One thought on “Windows 8, the Desktop Smartphone”