Zen Studios makes digital pinball games for a variety of platforms, marketed as Zen Pinball on Apple iOS and Sony PlayStation 3 & Vita, and Pinball FX2 on Xbox 360 and lately Steam for Windows. The popular series boasts numerous licensed Marvel Comics and Star Wars tables. Within the realm of digital pinball, Zen hews closer to Nintendo’s cheerfully unrealistic Metroid Prime Pinball than to the austere simulation of Pinball Arcade. Mechanically impossible gadgets and mini-games abound, the ball physics are rather suspect, and there’s even a comet-like glowing trail following the ball.

For my part, I don’t much enjoy Pinball Arcade but I love Zen/FX2! While not on the sublime level of LittleWing Pinball, Zen handily beats my previous second choice on iOS, Gameprom’s Pinball HD. The tables are just as pretty and thematically attractive, but much fairer – fewer balls shot straight through the flippers, more generous ball saves and kickbacks, and no tasks that require impossibly lucky shots. Your best way to judge for yourself is the new Steam version, it’s free and offers time-limited demos of all available tables. Here are some tips to enjoying the series:

The iOS and Steam versions currently share only two original tables, but happily this includes the excellent Tesla (pictured below) and the hilarious Shaman. Of the other original iOS tables, three are very good as well (Epic Quest, Excalibur, Paranormal). The one table I found rather dull is Sorcerer’s Lair, which unfortunately is also the free default table. I advise you to buy another table or try the Steam version before judging the game based on Sorcerer’s Lair. 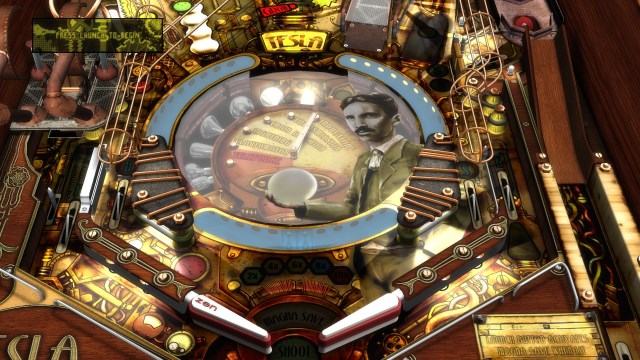 The Steam version sells tables in fairly expensive packs rather than individually, but the outstanding implementations with full gamepad support are worth it. The original tables are split between the Zen Classics Pack (including Tesla and Shaman) and the Pinball FX2 Core Pack, and they all range from decent to excellent in my opinion.

2013-09-12: Epic Quest, Excalibur, Paranormal, and the free Sorcerer’s Lair are now also available on Steam, as well as Earth Defense, Mars, and Ms. Splosion Man which have yet to appear on iOS.

2014-11-17: Many more tables are now available cross-platform, which today also includes PlayStation 4 and Xbox One. The PlayStation Vita turns out to be an excellent mobile pinball machine despite its small but gorgeous screen, thanks to its precise buttons. Even better, once you buy tables on the Vita you can also import them on the PS4 free of charge! I’m cnahr on PSN, iOS & Steam if you want some feeble competition on your pinball leaderboards.