Eclipse: New Dawn for the Galaxy is Big Daddy Creations’ recent iOS port of the popular 2011 board game. Thematically, Eclipse is a space 4X game and insofar resembles many PC classics of that genre, most famously Master of Orion by SimTex. Mechanically, however, Eclipse is a Euro-style board game, and that’s where things get interesting.

Eclipse is far from the only space 4X game on iOS. Chimera Software’s acclaimed Starbase Orion is a more straightforward continuation of the PC legacy: huge and lengthy, firmly rooted in the “more is better” ideology, a veritable galaxy simulator with an abundance of buttons and features, numbers and lists. Eclipse is the opposite, and that’s what I like about it.

Eclipse is far from trivial – indeed I recommend obtaining the board game rules from Board Game Geek to get an idea what’s going on. However, the learning curve is mostly a result of the board game heritage. Some rules may surprise veteran PC gamers (more on that later), and the extremely compact presentation is heavy on icons that you simply have to memorize.

On the upside, the game is played almost entirely from a single screen, with combat resolution as the major exception. The first of the following screenshots shows the sparse galaxy map, and the second shows all available UI panels. That’s it – almost the whole game at a glance! Once you know your way around it, this design allows very rapid gameplay with a minimum of context switches or extraneous inputs. 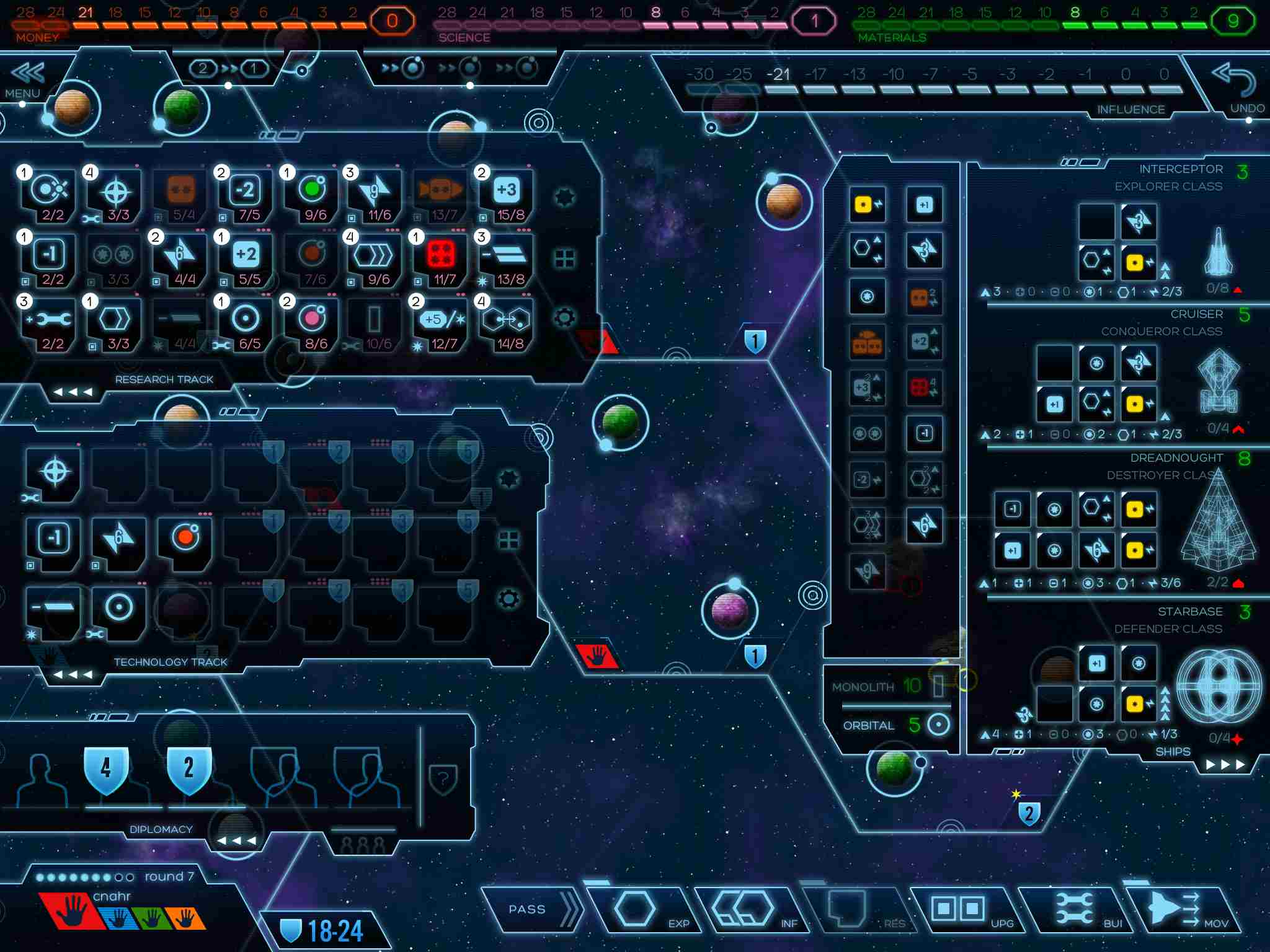 The only dedicated action buttons are the ones in the lower right. Otherwise, all icons do double or triple duty: they show available resources and/or actions, some can be tapped for more detailed information, and some can be dragged to initiate an action. “Research Track” shows available technologies and their costs; drag a highlighted item to your “Technology Track” and it’s researched. “Ships” shows available components to the left, using the same icons as the corresponding technologies. All information is visualized directly within the icon: sparks for energy draw, multiple dots for multiple points of damage or protection, etc. Drag a highlighted component to a ship design and all ships of that type are upgraded. These UI mechanics are a direct translation of the counters and panels that ship with the board game, and they work extremely well in Big Daddy’s implementation.

Eclipse offers a respectable diversity of player actions, but tightly restricts how many can be performed. The entire game runs for only nine turns, and each player’s actions per turn are limited by an “influence” meter. Controlled sectors and performed actions each cost influence – essentially money, supplied by one of the three kinds of planets. Should you ever go so far into the red that you cannot pay for your influence, you’ve automatically lost the game due to bankruptcy. Similarly, there are limits to how many ships you can build in total and per action, and how many ships you can move at once.

This means every single action matters, and the range of possible actions reflects that. There are no planetary buildings, let alone build queues. Planets are naturally specialized for one of three outputs (money, science, materials) and that’s all. This seems primitive at first, but I found it removes much pointless tedium compared to standard 4X games while making the “terrain” of space more important. Go conquer another sector if you need a different planet, that’s what the game is all about!

Research and ship upgrades are relatively detailed but likewise show a welcome focus on essentials. While a few technologies are incremental upgrades, research isn’t dominated by boring 5% bonuses or dreary Laser 1-2-3 progressions as in certain popular PC games. Eclipse’s combat is designed for six-sided dice, so every single modifier point can change the outcome of a battle. Moreover, nearly half of all technologies represent new abilities or non-combat bonuses. Each player can research only a fraction of all available technologies in one game, so specialization is inevitable.

Since Eclipse is originally based on physical counters, production and expenses increase in predefined steps that represent non-linear point increases. For example, the fifth science planet provides two extra research points rather than one. This is another simple and effective means of rewarding focus and specialization.

Finally, I’m quite fond of the semi-interactive combat system. Two fleets automatically fire on each other, with players deciding where to assign hits and whether to withdraw. The system is simple but also fast and elegant, reminiscent of older space 4X classics like SSG’s Reach for the Stars. Some people love elaborate tactical combat layers in strategy games but I’m not one of them. I feel they slow down the bigger game too much, and they tend to either make strategic decisions irrelevant or else become meaningless busywork themselves.

The board game heritage also results in some excessive abstractions, due to the idiosyncracies of physical markers and tiles. If your influence meter is full you cannot take any more actions, even if you’re swimming in gold. Players can arbitrarily rotate sectors upon “discovery” to determine their wormhole connections, and discard unwanted ones. The number of explorable sectors is not limited by space or time, but rather by the number of sector tiles in the original board game. Technologies become randomly available for research, and mysteriously have only one or two “copies” each: researching the last one denies the next player that technology.

The so-called “virtual fleet” strategy is entirely based on Eclipse’s abstract build system. Since you can build ships anywhere instantly, a virtual fleet (i.e. one that does not yet exist) is strategically more valuable than a real one, as the latter must slowly travel across the map! This somewhat resembles chess where the best moves often just threaten pieces rather than taking them. On the opposite end of the spectrum, buying units in Civilization is possible but inefficient. It’s an emergency action that rather feels like cheating – you’re supposed to “realistically” build units in high-production cities. Eclipse completely ignores such concerns of simulated reality.

Winning the game is not decided by controlling the galaxy, as one might infer from the theme, but by the dreaded concept of victory points. Only a fraction of those comes from occupying sectors. Another major source is winning battles, regardless of who ends up owning the contested sector. Worst of all, you can simply pick the “Victory Points” option when you discover an ancient relic! Usually, when presented with the nonsensical choice of 2 VPs versus a unique powerful relic you’re better off taking the 2 VPs. This is perhaps my least favorite aspect of Eclipse.

As in any dice-based game, there’s also a rather excessive component of random chance. Two-player games are all but pointless since they are dominated by the luck of early exploration. The player who finds better nearby sectors and wins the first few battles against sector guardians almost invariably wins. The minimum number of players for a decent game of Eclipse appears to be four. Here, a leading player may be targeted by multiple opponents who can also form diplomatic relationships, giving each a small resource boost. This somewhat mitigates the randomness, although several good or bad die rolls in a row can still be decisive.

Eclipse surprised me, as I’m more familiar with computer games than modern board games. Despite its flaws, the game and its iOS port are in some ways far superior to traditional PC strategy games. I’ll try to formulate my impressions as two design lessons.

Minimize Actions.  Where possible, make symbols interactive to avoid extra UI controls. Every game action must involve a choice, so remove all predictable or inevitable actions. Impose artificial limits to avoid repetitive actions. AI governors imply design failure. If an action can be automated, remove it from the game instead.

Although Eclipse for iOS is quite polished overall, there are some defects and annoyances. First, Big Daddy Creations requires an e-mail account even for single player! The official excuse is future cross-device matchmaking. Asynchronous multiplayer is hampered by unreliable notifications and a total lack of turn replays. Fortunately the AI is quite good, if sadly addicted to plasma missiles. Lastly, the initial release has a number of bugs which BDC is working on. One important bug lets players keep production from sectors abandoned due to bankruptcy, as described in this comment.

If you’d like to know more about Eclipse, Kelsey Rinella and Michael Barnes wrote two glowing reviews. Brandon Cackowski-Schnell describes the typical experience of the novice Eclipse player, i.e. losing a lot. If that happens to you, consult Taogaming’s very helpful Five Thousand Words about Eclipse and David Ogren’s reply on Stack Exchange.