Space Hulk has recently arrived on Steam, with an iOS version soon to follow. This isn’t the first electronic adaptation of the classic 1998 board game, but unlike the 1993–95 versions it’s an almost literal translation of the board game, of the kind you often see on iOS but very rarely on Windows. Specifically, Space Hulk implements the 3rd edition rules (PDF), with some alterations as noted in the Steam Community FAQ.

I never played the board game, but I did have fond memories of the older real-time version in which I always died rather quickly. The setting shamelessly rips off Aliens, with W40K space marines instead of colonial marines fighting genestealers that look suspiciously like H.R. Giger’s aliens. Full Control’s adaptation rounds out the homage with a noisy helmet camera view for the selected space marine. Otherwise, you get what you’d expect of a $30 indie game. The models are about the same quality as in the Dawn of War RTS games, meaning they look decent enough in the overhead view but you shouldn’t expect the lavish details of a modern FPS in the close-ups – see the screenshot for an example. 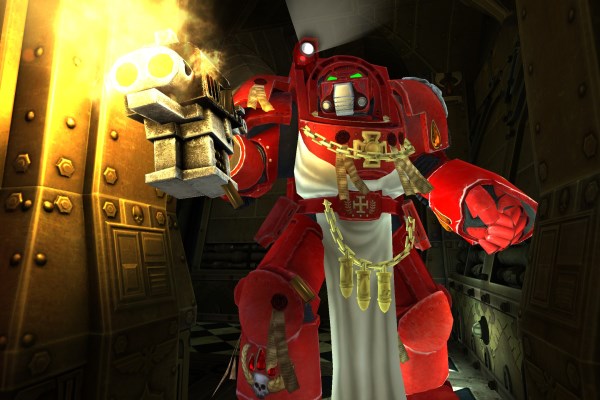 Actually a visualization of 2D6

Sound effects and gravelly voice-overs are spot on, controls are only slightly clunky, multiple units can move simultaneously, and while the change log documents many hasty bug fixes I was lucky enough not to encounter any bugs myself (other than the tyranid variety). Since I haven’t tried multiplayer, my only significant criticism is the simple genestealer AI. They seem to appear randomly and run in a straight line to the nearest enemy, rather than attempting tactical maneuvers. This makes some early missions easier than they should be, but it’s not a crucial issue given that the campaign is quite difficult to begin with.

The game includes a new 3-mission tutorial and the 12-mission campaign from the 3rd ed. board game. While I was enthralled during the first couple of missions, I found that the game quickly got repetitive and stopped playing altogether in campaign mission 10, an extremely tedious unit placement optimization puzzle. This might sound like the negative reviews you’ve read elsewhere, but it’s actually rather the opposite. You see, Space Hulk is not a poor port of a great game – it’s a solid port of a mediocre game. Let me explain.

When I got my pre-order copy of Space Hulk I was completely baffled by early reactions in the PC gaming community, ranging from lukewarm indifference to frothing outrage. All I saw was a very solid board game adaptation, like many others I enjoy on my iPad and indeed superior to most. What was going on? Eventually the true reason became apparent: most PC gamers were not expecting a literal board game adaptation. Those are rare on Windows, and previous Windows incarnations of Games Workshop properties were original video game designs, usually of the RTS flavor like Dawn of War.

Calibrated with these experiences, people were horrified that Space Hulk merely played canned animations in response to simulated die rolls – which is of course exactly what every iOS board game adaptation does (if it has any animations at all). Evidently the critics were hoping for a totally different design that would use the setting in a much more sophisticated way, perhaps something like Jagged Alliance or a tactical FPS. What they got instead was a simulated board game, with some modest visual embellishments but stripped of all tactile and social elements. Turns out that’s not at all what they wanted, as Rob Zacny has nicely analyzed. And I think that’s partly because Space Hulk wasn’t such a great design to begin with.

On a design spectrum from “elegant simplicity that computer games would do well to emulate” (e.g. Eclipse) to “mindless die-rolling that has no place on a computing device” (e.g. Talisman Prologue), Space Hulk definitely sits closer to the mindless end. Depending on your preference of spiders vs. tyranids, it’s similar but somewhat inferior to Warhammer Quest, lacking that game’s experience system, item management, and quest narratives to tie its missions together. Just as with Space Hulk, I was initially quite enthusiastic about Warhammer Quest and certainly got my money’s worth, but the extreme repetitiveness and randomness eventually wore me down.

I also felt reminded of Zulus on the Ramparts!, another game with a fantastic setting and fairly elaborate rules, which nevertheless boils down to doing the obvious thing while hoping for lucky dice. Zulus! was conceived as a solo game with enemies moving randomly or by script, but Space Hulk’s weak AI is little different there. So the major distinction is the quality of the digital port, which is frankly rather terrible for Zulus! – slow and impenetrable, with too many screens and redundant actions, and rather ugly to boot. (Do read the PDF rule book for Zulus!, though. It has some nice history lessons and great design notes.)

Space Hulk on Windows is top notch by the standards of iOS board game ports, on the same level as the justly celebrated Warhammer Quest app. PC gamers may be understandably reluctant to pay $30 for a game that really competes with $10 games on a different platform, but the upcoming iOS version should be an easy recommendation as far as app quality is concerned. Just be aware that you’re getting a literal translation of a somewhat mediocre board game that mostly involves rolling lots of dice.

2013-12-05: The iOS version is now available for $10. The port is a whopping 3.4 GB but includes post-release improvements from the PC version, such as variable animation speeds, and unexpectedly also the excellent shoulder cam. I don’t think I’ll be getting it myself so I’ll just point you to Kelsey Rinella’s review. At $10 and given the (by iOS standards) outstanding production values, this should be a safe buy for fans of the board game.