Small World is a strategy game about territory control, similar in concept to Risk yet quite different in execution. The 2009 board game was designed by Days of Wonder, most famous for the Ticket to Ride series. In the evolution of board games, Small World’s closest relative is not classic 1959 Risk itself but rather History of the World, designed by Ragnar Brothers in 1991 and revised in 2009 as Brief History of the World. You can find complete PDF rules for both games on the linked product pages.

History of the World

Today, everyone fashionably hates Risk (the original version) but the widely beloved (Brief) History of the World frankly isn’t much better. Unlike Risk, turns represent historical epochs. Players select a new empire each turn, out of a handful that are appropriate for the new epoch. That sounds like a good idea, but the practical result is a rigidly scripted game with grossly unbalanced factions and very limited options. The actual gameplay is not so much about world conquest as about trying to saddle others with a useless empire like Japan or the Mayans, while racking up guaranteed victory points as Rome or the Mongols.

At the end of each turn empires “go into decline,” meaning their armies become inactive but continue to score points for their owners. From a thematic viewpoint this makes no sense at all – why is ancient Egypt scoring points for modern France, and why do the French have to expend conquest points to enter Egyptian territory regardless? Incessant dice rolling tops off a game design that’s probably best suited for playing face-to-face, with lots of alcohol. (Codito’s iPad app is quite nice, though, and recommended for fans of the board game.)

Small World gets rid of scripted predictability and thematic contradictions by moving the History of the World concept to a fantasy setting. You’re an off-board overlord directing minions to do your bidding, using a wonderful and hilarious range of racial and bonus abilities. The combos you see in the screenshot are actually among the more ordinary ones – how about Spirit Halflings (can have two races in decline, fortify land with holes in the ground) or Diplomat Ghouls (prevent one other player from attacking, can continue to attack while in decline)? Combos are generated randomly but there’s always a choice of six, so players are never forced to pick a truly bad one.

Similarly, decline is not automatic but fully under player control. You can keep conquering as long as you have sufficient troops, or go into early decline to grab a more promising race. There are no scripted starting locations, either. All races can enter the board from any edge, with additional options granted by special abilities. Endangered frontiers can be hardened with extra troops not used elsewhere. Finally, the dreaded dice are needed only for each turn’s last conquest and for the Berserk ability. 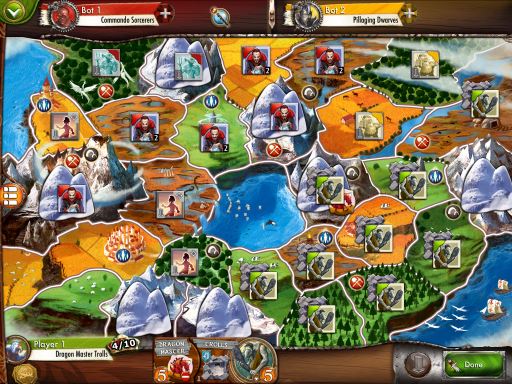 The original Small World for iPad was a disappointment, without any online multiplayer and otherwise only 2-player matches. That was a significant restriction because Small World gets more interesting as the number of players increases, due to the richer interaction between all their various combos and territories. Note that the board layout actually changes depending on the number of players – compare my 3-player screenshot with the 5-player one on the Kickstarter project page that successfully funded the new enhanced version.

That version, now released as Small World 2, is full-featured with an efficient UI, very pretty and polished, and well worth its asking price of $10. Three mini-expansions are offered as IAP, each with several new races & abilities. They seem a bit overpriced but, remarkably, only the inviting player in a multiplayer match needs an expansion to grant its use to all participants. Speaking of multiplayer, you’ll need an account with Days of Wonder but at least it’s automatically created based on your GameCenter account and not required for offline play.

There’s also the essential turn replay for asynchronous games, but alas no chat log. Moreover, I’ve been told that the entire game vanishes when one player times out – a rather serious issue, but like the chat log one that should be fixable in a patch. Asynchronous multiplayer works well otherwise. I’ve had no trouble completing a series of matches with 2-5 players using the maximum 2-day time-out per player. Overall, I recommend Small World 2 to anyone looking for an entertaining territory control game that’s neither mindless nor overly complex.