Edward N. Luttwak’s The Grand Strategy of the Roman Empire (Johns Hopkins University Press 1976) is a compact (255 pages) and brilliant classic on military and diplomatic strategies from the principate to the tetrarchy.

Recently Luttwak published his long-awaited companion piece, The Grand Strategy of the Byzantine Empire (Harvard University Press 2009), much delayed and much expanded (498 pages) due to the richness and obscurity of Byzantine sources, the most important of which he describes individually.

Definitely get both books if you are interested in military strategy and/or Roman history – they are wonderfully written and convincingly argued. In the following I’ll highlight some points I found especially interesting. Note that my brief summaries are not necessarily precise.

Late republic and early principate followed the same basic strategy to secure and expand their borders, one that was extremely economic in its use of military force. The imperial heartlands were surrounded by intimidated clients who dared not attack Rome but who suffered the brunt of outside attacks, at their own cost. They were intimidated because Rome kept a policy of eventually annexing its smaller neighbors, one after another. Obedience might postpone this fate or ease the transition, especially for a conveniently corrupt ruler.

This policy could be maintained with a small mobile core of legions. It gradually failed when Rome had expanded to the utmost of its abilities in the first century. Now it was mostly surrounded by deserts, oceans, Germans, and Parthians, all of which stubbornly resisted further expansion. Rome continued a policy of diplomatically influencing its direct neighbors, but without a credible threat the necessary bribes increased even as the reliability of these “allies” decreased.

The capacity for annexation was visibly gone, and with it went the principal incentive to obedience on the part of client rulers.

Luttwak exemplifies his analysis with the province of Dacia, established by Trajan in 106. On a map, this strange bulbous extrusion from Rome’s Danube frontier into the barbarian north looks like an unsustainable vanity conquest. But in the light of Rome’s client strategy it was actually the opposite: the last successful reprisal of the old annexation policy against a disloyal client. While the empire remained strong and its enemies disunited, the new province could even threaten neighboring independent tribes.

But the barbarians kept pushing westward in growing numbers, and paradoxically became more unified thanks to their Romanized culture in the border regions. Within the empire Romanization was a force of assimilation that eliminated unrest, but outside it enabled alliances against Rome where previously there was no common ground. This culminated in the German kings who crowned themselves kings of Italy and eventually of the Roman Empire itself, seeing themselves as the true heirs to the realm.

The empire’s first reaction against growing border incursions was to establish a defense in depth while keeping the basic system of mobile legions. However, that could not work without a shield of (more or less) loyal clients that absorbed the initial attacks. Now these attacks devastated vast tracts of imperial lands, and eventually threatened Rome itself.

Diocletian finally instituted an extensive ring of hard point defenses on the frontier, essentially a wide strip of fortresses prefiguring medieval castles that could contain most incursions on the spot and otherwise hold out until help arrived. Interestingly, Constantine returned to a heavier emphasis on mobile field forces with fewer troops on the frontiers. The reasons are unclear but one may safely assume that insuring his rule against the next usurper played a prominent role – Constantine had been one himself, after all.

Byzantium never knew the kind of security and supreme power that old Rome had possessed for centuries. Peace was a temporary interruption of war, and that meant Byzantium could not afford Rome’s traditional attrition warfare whose goal was the total destruction of an enemy. On the contrary, the abundance of potential enemies made it essential that some of them should be won over by diplomacy, so as to help fight against the rest. The new strategic goal was to remove the current threat with as few losses as possible, to both Byzantium and today’s enemies who might be tomorrow’s allies.

Byzantine diplomacy was routinely successful in converting the very multiplicity of potential enemies into its own remedy.

Byzantium essentially followed a more dynamic version of the old Roman client system, although from a weaker position where bribes often replaced threats. Thanks to the empire’s unique position as a pinnacle of luxury and sophistication compared to most of its enemies, such bribes and tributes were actually economic subsidies rather than net losses.

The Huns and all their successors inevitably used their tribute gold to buy necessities and baubles from the empire – special arrangements were negotiated for border markets – hence the gold exported to the Huns returned to circulate within the empire rather quickly, except for the minute fraction retained for jewelry. [p. 55]

The empire could not dream of protecting its entire territory by strong fixed defenses in the style of Diocletian. Aside from the region around the capital, Byzantium relied on an elastic defense that caught raiders on their return while the populace was sheltering in fortified frontier villages. Such border warfare required great speed and precision, which in turn relied on excellent training and morale.

This circle emerges as a constant theme in Byzantine warfare: being numerically inferior, the imperial army relied on stratagems which required excellent soldiers, which in turn increased the length and cost of training, reducing the number of available soldiers even further. Diplomacy and bribes helped to boost numbers with foreign allies, though.

Luttwak showcases this system’s most famous success in Herakleios’ victory against the combined forces of Persians (under Chosroes II) and Avars who had already conquered most of the empire and were besieging Constantinople itself. From 624 to 628, Herakleios left his beleaguered capital behind and circled around the Persians’ rear to strike deep into the Sassanid heartland, reaching Ctesiphon itself. The Persians failed to catch him due to the amazing speed of his excellent army, and they utterly failed to anticipate his ability to campaign during winter.

That last was possible thanks to hardy ponies supplied by the western Turkic qaganate – enemies of the Avars and Persians, won over by the far-ranging Byzantine diplomats. Meanwhile, the peerless Byzantine navy so completely repulsed the Avar attempt to storm the city from the sea that the Slavs who had supplied most of the Avars’ manpower left in dismay. The siege collapsed, and Byzantium regained almost all its lost territories in the ensuing peace negotiations.

The empire suffered large territorial losses from the Muslim jihad, but that was more due to popular dissatisfaction than any military failure. Early Islam’s discriminatory dhimmi taxes were “blessedly lower” than the regular taxes Byzantium and Persia had levied for their endless ruinous wars, and the dhimmi status itself was preferable to the Byzantine treatment of the remaining Jews and the Monophysite majority in the south. Christians and Jews in Zoroastrian Persia probably felt little different. Indeed, Luttwak judges the loss of Syria and Egypt to Islam “a mixed curse” for Byzantium, as it removed a major source of religious dissent: it brought the blessing of religious harmony, and increased cultural unity.

True Facts about the Cataphract

The famous Byzantine cataphract (i.e. “covered up”) has a rather complex history. The term was originally applied to the armored shock cavalry of the Parthians who defeated Crassus in 53 BC, in conjunction with a greater number of horse archers. Since then Rome had gradually adopted heavy cavalry covered in chain or scale armor whose riders used lances and swords or maces. Byzantium also relied on such cavalry throughout its existence.

That much I knew, but Luttwak presents two facts that surprised me. First, a major variant of armored cavalry that more closely resembled medieval knights was introduced by Sassanid Persia. These clibanarii were shock cavalry wearing full-body plate armor. The Latin name (Byzantium spoke Greek but loved Latin military terms) means “bread oven bearers,” mocking the heat that such warriors had to endure in the Mesopotamian summer. The Byzantines adopted this style as well, and apparently maintained cavalry units outfitted in both cataphract and clibanarii fashion for several centuries.

The second surprise was a bigger one. During the height of Byzantine power, heavy cavalry units were routinely trained as horse archers in the Hunnic style! Seeing how easily Attila’s hordes overpowered the traditional Roman army, the new empire quickly copied the Hunnic style of horse archery with the powerful composite reflex bow, effective up to 150 meters and piercing armor up to 60 meters. But you’d still want heavy cavalry for charging, and why have two soldiers when one can do both jobs?

So the Strategikon attributed to emperor Maurikios (ca. 582–602) describes a kind of super-soldier as the mainstay of the Byzantine army: armored with cataphract-style chain or scale mail, shooting the composite bow from horseback like a steppe nomad, but also fully capable of charging with the lance and sword-fighting at close quarters. Here’s a training routine from the Strategikon:

On horseback at a run he should fire one or two arrows rapidly and put the strung bow in its case, if it is wide enough, or in a half-case designed for the purpose, and then he should grab the lance which he has been carrying on his back. With the strung bow in its case, he should hold the lance in his hand, then quickly replace it on his back, and grab the bow. It is a good idea for the soldiers to practice all this while mounted. [p. 271] 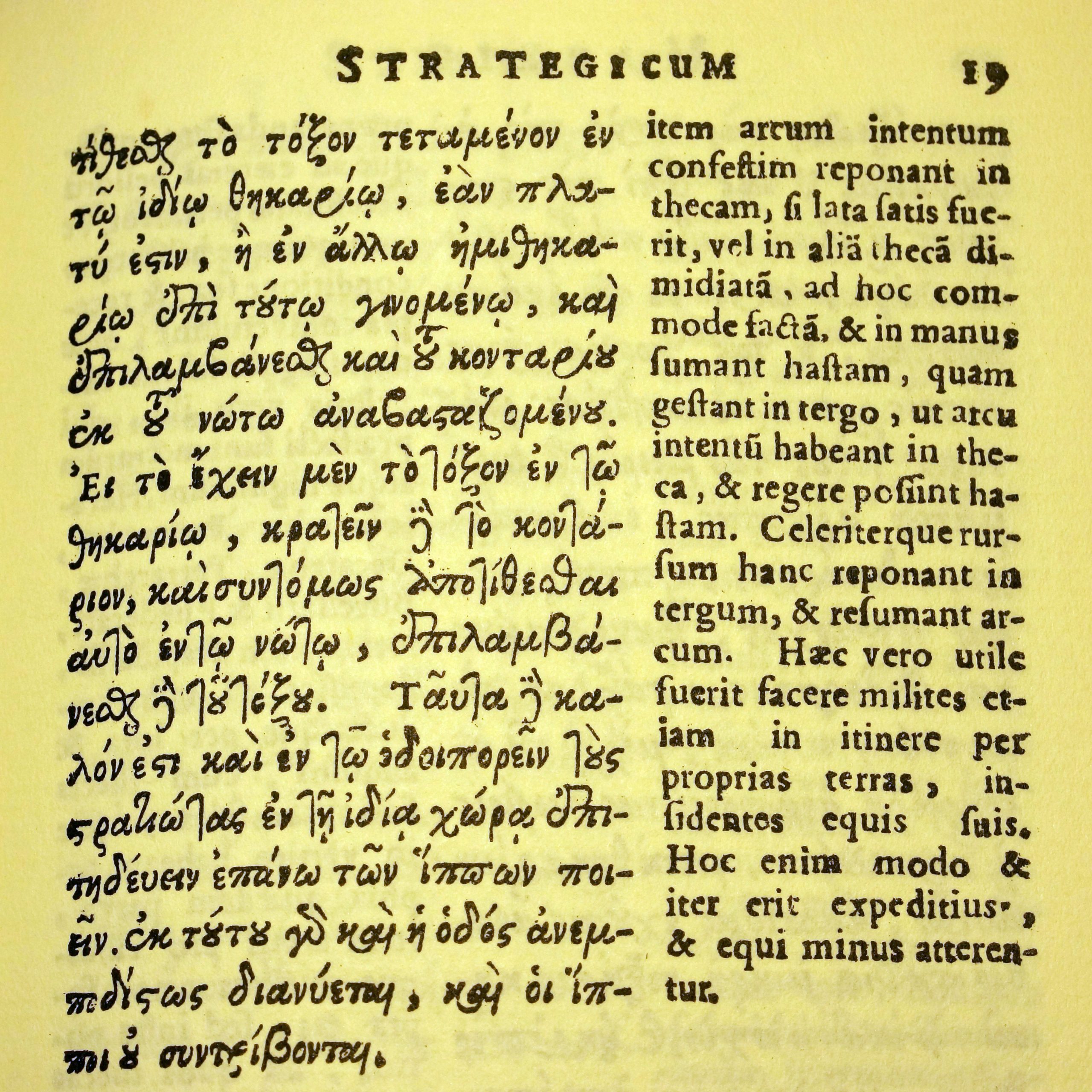 Horse archery also adds a twist to the history of the stirrup, presumably introduced by the Avars and adopted by the Byzantines. Contrary to popular assumption, stirrups are by no means necessary for lance charges. They would add little extra stability over tightly gripped thighs and a high-backed wooden saddle. Aside from easier mounting, their most important military use would indeed have been for standing up while aiming the bow.

If Byzantium’s extensive use of archery is little known today, some of the fault may lie with the Byzantines themselves who couldn’t quite get over the Homeric (and Roman) prejudice that bows are for wimps. Writing in the 550s, Procopius still feels the need to apologize for the empire’s archer-soldiers:

Homeric bowmen… were neither carried by horse nor protected by spear and shield… Least of all they could participate in a decisive struggle in the open… But the bowmen of the present time go into battle wearing corselets and fitted out with greaves which extend up to the knee. From the right side hang their arrows, from the other the sword. And there are some who have a lance also. [p. 57]

One thought on “Luttwak’s Grand Strategy of Rome”