Playdek’s latest iOS board game adaptation is Lords of Waterdeep, a worker placement game set in the Dungeons & Dragons universe. The board game itself is quite recent, published in March 2012 – click “Product Details” to download the original PDF rules. There was some apprehension regarding the fairly simple design that shares very little with the famous role-playing system. Still, D&D and Playdek sounds like a match made in Mount Celestia, and Pocket Tactics’ Kelsey Rinella was properly enthusiastic about the result. After several hours I certainly agree with him. Lords of Waterdeep is a great light strategy game for D&D fans, even and especially if you don’t normally like worker placement games.

The typical Playdek polish is immediately evident. The city of Waterdeep is rendered in beautiful detail, with parallax scrolling and plenty of decorative animations. Ships sail, griffins circle, clouds drift, and there’s even a day-and-night cycle. The zoomed-in view gives the background art perhaps rather too much space, but you can zoom out for a simplified view that avoids scrolling. Quests and intrigues are represented by cards boasting the usual D&D ren-fair artwork in all its splendor – see the example below. Checking your own and your opponents’ cards does require slide-out panels, but there’s one well-hidden alternative view. Tap on your (or anyone’s) red victory point icon for an overview screen that shows all players at once. Here you can also access a history of played cards, via the scroll icon.

There’s just one curious lapse in the gorgeous visuals. The board game represents adventurers as simple cubes, color-coded for basic D&D classes – cleric, fighter, rogue, wizard. Rather than using realistic figurines or at least recognizable symbols, Playdek faithfully renders all your adventurers as those same little colored cubes. Fulfill a quest, and a flock of cubes flies across the map. I can only imagine that Wizards of the Coast’s licensing prohibited a less ridiculous representation. After a few games you’ll get used to it, though. 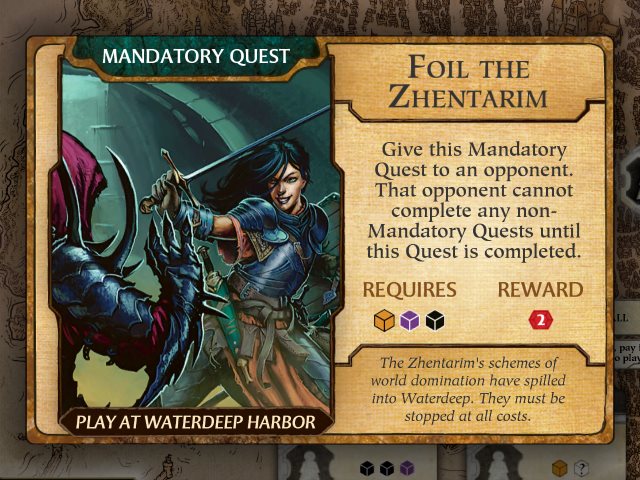 These cubic adventurers are not your “workers” but your resources, along with gold. You collect them by placing agents on various recruitment buildings, and expend them to fulfill quests. There are three special map locations: Cliffwatch Inn provides new quests; Builder’s Hall sells new buildings that provide exclusive owner benefits, in addition to resources for any visitor; and Waterdeep Harbor allows playing intrigue cards. These add a nice competitive twist to the worker placement formula. Intrigues are mostly sent to another player for a variety of amusing effects, from outright resource stealing to imposing a low-paying mandatory quest.

Each player is supposed to represent one Waterdeep faction and one of the titular lords whose identity is hidden until the final scoring. Sadly, factions are purely cosmetic and lords are distinguished only by small victory point bonuses for specific quest types. The game runs for eight rounds, then victory points are determined based on fulfilled quests, lord bonuses, and the number of unspent adventurers and gold pieces. Scoring is simple and straightforward, with the hidden lord bonus as the only factor of uncertainty. That’s worth pointing out because worker placement games tend to employ byzantine scoring mechanisms, as discussed below.

If Lords of Waterdeep doesn’t sound very deep, that’s because it isn’t. You can easily finish a solo game against the remarkably competent AI players in 30 minutes. Asynchronous multiplayer tends to stretch out, but only because quite a few cards require input during opponents’ turns. There’s plenty of room for greater complexity, and indeed the first expansion (which I hope we’ll see on iOS at some point) introduces corruption as a new negative resource. Moreover, your enjoyment may depend on your affinity to the Dungeons & Dragons universe, and your willingness to read the plentiful flavor text. As for me, I found Lords of Waterdeep immensely entertaining as it stands, and especially recommend it to anyone who tried and failed to get into classic worker placement games.

2014-03-25: Undermountain is now available as an in-app purchase. That’s the first half of the first board game expansion, Scoundrels of Skullport (with PDF rules), which also includes Skullport and the above-mentioned Corruption resource. Undermountain itself only offers additional cards for the existing rules, plus the option to add a sixth player. Since five-player games already take an inordinate amount of time and are heavily luck-based I don’t think that addition is terribly important, but the new cards are nice. Hopefully Playdek will soon deliver the second half of the first expansion, too…

There are quite a few of those on iOS, but until Lords of Waterdeep the only one I liked was the unusual Tikal. Sadly, Codito’s port is rather outdated by now. Playdek itself has created a gorgeous and well-received port of Uwe Rosenberg’s famous Agricola, generally considered the pinnacle of the genre. No boring cubes here – you pick up cartoon sheep that wriggle pathetically as you drop them onto your cooking hearth! The life of a 17th century farmer is convincingly animated, but much less convincingly simulated. The way resources become gradually available is both brutally restrictive and utterly non-intuitive. Final scoring adds another big dose of complexity, awarding a mess of varying bonuses for what you did – and penalties for what you didn’t. The result is what’s derisively called a spreadsheet game. You need to evaluate all the possible combinations and plan out your entire strategy right from the start, so as to maximize your net return of victory points per worker action.

Scoring is a notorious backdoor for arbitrary complexity in the worker placement genre. Another classic, Michael Tummelhofer’s Stone Age, got another high-quality iOS port by Campfire Creations and looks at first blush just as easy to play as Lords of Waterdeep. That impression lasts until the game ends and you discover that your score isn’t determined by your total construction efforts, but by the product of each kind of construction times the total number of icons depicted on each corresponding set of brown civilization cards, plus the square of the total number of green civilization cards! I found that scoring mechanism exactly as unfathomable as it sounds, and more than enough to offset the simplicity of the rest of the game. It doesn’t help that the game is thematically rather weak. All buildings you can buy act merely as equivalent VP tokens but cost wildly different sets of resources, evidently chosen only for the sake of mathematical optimization.

I spent less time with Caylus, William Attia’s castle building game that was ported by Big Daddy Creations. I refer the gentle reader to Bruce Geryk who lauds Caylus thusly:

When everything is out in the open, you can appreciate every skillful manipulation of the game, regardless of what it means in the game world. Watching some guy take penalty after penalty and still beat me was all the more amazing because I could see him doing it. He would even make comments, like “Oops, I guess I forgot to build a castle this time.” The first time I thought he was serious, until the fruit on his head became obvious. From then on, he won major style points for ostensibly “playing the game wrong” but still cleaning my clock. If someone were to try that against me now, I could probably stop him. But I would be focused on the mechanics, and not so much on the castle.

Lords of Waterdeep is the opposite: planning is generally short-term and based on the obvious board configuration, as in simpler traditional games. There is no need, or indeed possibility, to plan out long complex build chains. Fans of Agricola may find this disappointing, but I rather enjoy not having to set up a spreadsheet to know when I should buy my second pig…