Peter Breitling’s Clinometer is a small but sophisticated and very useful application for iOS, Android & Windows Phone. Using the various motion sensors built into these devices, it turns them into multipurpose (in)clinometers that can measure any surface’s three-dimensional angle relative to the ground. The picture below shows the two main display modes: a simulated gas bubble as in a spirit level (Wasserwaage) when the device is held horizontally, and a compass-style display when held vertically. 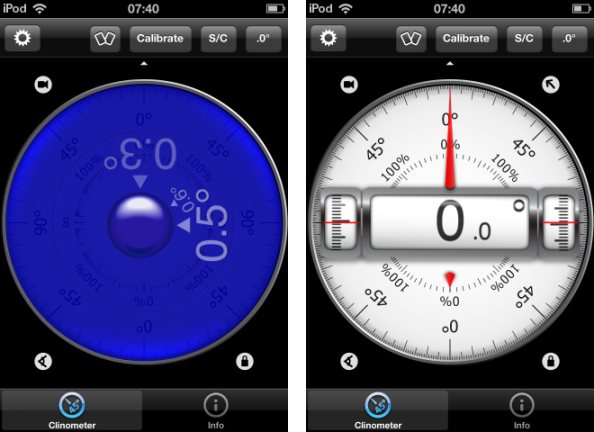 There’s plenty of additional features: an optional voice readout of the current measurement so you don’t have to look at the screen; a lock of the current position for difference measurements; an automatic lock when the device is motionless for an adjustable time period; a see-through mode using the back camera; and many more as outlined on the Apple iTunes page.

Loyd Case, who recommended the app on Twitter, noted that the iPhone Compass app has a similar feature in iOS 7 but it’s “somewhat crude by comparison.” Peter Breitling offers several similar apps that turn an iOS device into an accelerometer, a geometry triangle, or even a magnetometer. I haven’t tried those but the Clinometer is truly amazing, especially since it employs sensors that are normally wasted on clumsy game controls. Who would have guessed the high precision and useful tasks they are really capable of?