Aside from its native UI facilities, JavaFX provides a WebView that’s a fully-featured embedded HTML5 browser. The underlying WebEngine is a modified Webkit engine which comes as part of the freely available JavaFX source code.

For Java SE 8u40, only 1% of the files in the WebCore directory tree were changed, with minor bug fixes as far as I can tell. On the JavaFX mailing list, maintainer Kevin Rushforth stated that the delay is due to WebKit switching to C++ 11, triggering laborious tooling changes in the JavaFX compilation chain. Java SE 9 should receive updated versions more frequently.

WebView could run all the HTML5 sample applications I threw at it. The one I’d like to showcase here is HTML5 Chess, a terrific open source project by Stefano Gioffré. Although sadly abandoned today, the final release is a complete working chess program written in HTML and JavaScript.

You can play the demo online but for WebView hosting you should download the latest version. Extract the htmlchess folder from the archive, and then run this tiny JavaFX application from the directory that contains htmlchess:

There’s just one tricky part: WebEngine.load() requires absolute file paths, marked with the URI prefix file://. We want to load from a relative location, namely the current directory, so we need to fix up the location using Path and URI. If you’re running from within NetBeans, note that the current directory is the one above the dist folder containing the JAR file. Run your executable JAR and you should see the following window (after clicking “Both” to show both the 2D and 3D chessboard): 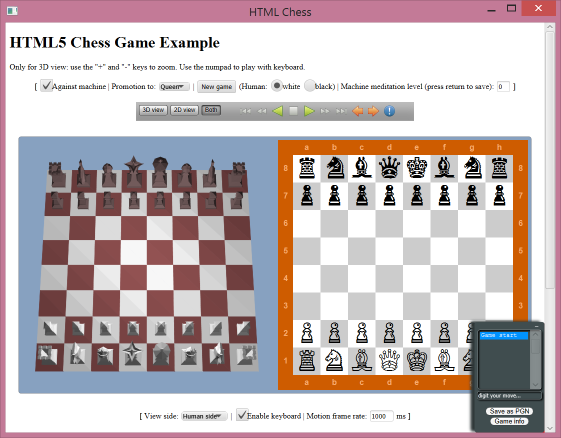 The screenshot was taken at 100% DPI scaling since the page has a lot of content – the Portable Game Notation (PGN) reader below the lower window border is not even visible! As of JavaFX 8 WebView supports full page zooming which the sample code matches to the current system DPI setting. A text-only zoom function is also available, though not terribly useful.

JavaFX supports rich interactions between the Java application and its hosted WebView. You can access the HTML document through the usual Java org.w3c.dom API, attach Java handlers to selected JavaScript events, use executeScript to run arbitrary JavaScript code snippets, and let JavaScript functions call back to arbitrary Java methods.

Regarding HTML5 capabilities, JavaFX 8 added web sockets, web workers, and web fonts, along with printing HTML pages. Of course WebView can simply show remote websites or local help pages, but there are a few reasons to consider moving your main UI into WebView:

In the HTML Chess example, some obvious improvements would be better management of local PGN files, or an alternative Java implementation for the slow JavaScript turn prediction (enabled by “Machine Meditation Level”). The idea of a JavaFX client application with an HTML UI might seem weird at first, but I think it’s an interesting option – and probably a necessary one, given the rapid spread of HTML/JS as a standard UI technology.

As of April 2015, Anton Epple’s DukeScript seems to emerge as the principal framework to build cross-platform Java UIs based on HTML and JavaScript. DukeScript uses Knockout.js to connect Java classes with the HTML frontend. The latter is presented by the JavaFX WebView on desktop systems, by the native WebView on Android, and by the RoboVM UIWebView on iOS (see current source code).

NetBeans’ Geertjan Wielenga has long been championing DukeScript, most recently in Java in the Trenches where he argues that Java must provide a viable frontend option based on HTML/JS: More or less the general consensus appears to be that the frontend battle has been won by JavaScript. Naturally there’s a NetBeans plugin for DukeScript already. It will be interesting to see if the framework takes off, or if Java developers are content to continue their slide towards “Cobol and AS/400 RPG and their various other crusty friends,” as Wielenga puts it.

After posting this article I discovered a number of related projects on the web, both old and new. It seems the concept of combining local applications with browser engines is gaining traction. This section, last updated on 26 March 2016, collects links with brief introductions to such projects.

6 thoughts on “WebView, the other JavaFX UI”