For the past 2½ years I’ve been brewing coffee with the Technivorm Moccamaster KBT 741, generally accounted the best drip coffee maker in existence. It’s not cheap – I paid €200 for the predecessor of the linked model – but it very thoroughly extracts the coffee grind’s tasty chemicals, thanks to a precise water heater and cleverly arranged multiple drip outlets. Besides, how can you not like a machine with such an awesome name? (The “mocca” here refers to European mokka which simply means strong black coffee, not American mocha which is a variant of hot chocolate.)

I also used the electric burr grinder Krups GVX2 which unfortunately looks much more solid than it is. The cheap plastic body generates enough static electricity to make half the grind stick to its complex surfaces, turning cleaning into a lengthy and messy procedure. Poorly fitted safety pins come loose during operation, so grinding often grinds to a halt until the cover is slammed back down on the machine.

So I went to find a better mill, and I did find the excellent Hario Skerton. While I was at it I also checked out the famous AeroPress coffee maker to see how it would compare to the Moccamaster. 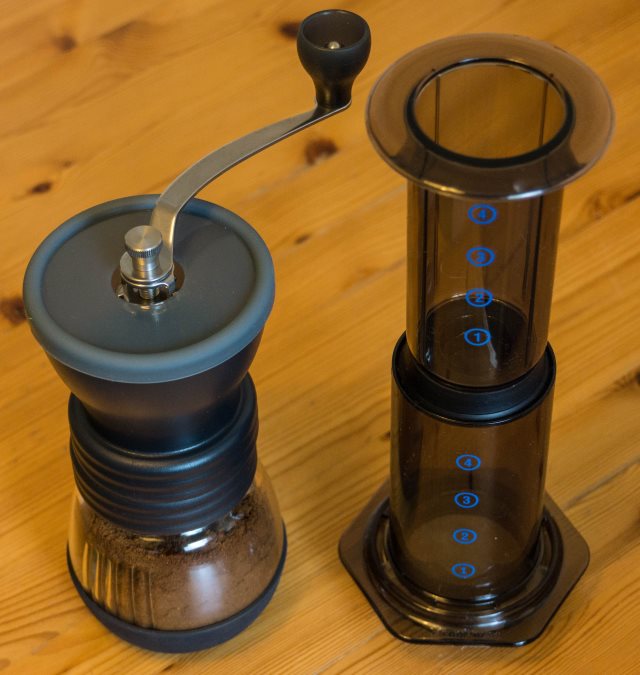 Turns out the best coffee mills are Japanese. The Hario Skerton, listed as MSCS-2TB on the product page, is an adjustable manual ceramic burr grinder whose looks-to-quality ratio is about the inverse of the miserable Krups GVX2. The unassuming little mill is incredibly solid and made of excellent materials. There’s virtually no static electricity and as few parts and surfaces as possible, resulting in very easy cleaning. The grind receptacle comes with a separate airtight rubber cap, allowing it to double as a storage container for several days of coffee (depending on consumption).

One caveat: While the grind level selector is as robust as the rest of the mill, it features no markings and is not easily adjusted. Once you’ve found the proper fineness the grinder will produce that level reliably, but it’s not practical to change levels on a regular basis. Moreover, the manual explicitly warns against grinding anything but coffee – worth mentioning since some retailers advertise the Hario Skerton as a general-purpose kitchen grinder.

That said, the Hario Skerton is a great inexpensive device to grind your daily coffee. After some adjustment I could easily match the fairly fine grind of my old Krups. Manual operation does take more time but it’s good for your arm muscles! Speaking of price, I paid €38 but also saw it under €30. The Kyocera CM-50 CF appears to be the same model but costs €60 in Germany; I don’t know which company actually manufactures the grinder.

The Aerobie AeroPress caused a huge stir among coffee enthusiasts: a cheap, fast, simple way to produce deliciously smooth coffee. Zachary Crockett recounts the history of the AeroPress and its remarkable inventor, Stanford professor Alan Adler, who also designed flying discs and much else besides.

The picture above shows the two tubes that constitute the AeroPress itself. The package also includes filters, a filter holder, an adapter cone for grinding, a spoon and a stirrer. You put grind into the lower tube where it sits on a screwed-on filter, then pour boiling water on top and stir for ten seconds. Now you insert the upper tube which is fitted with an airtight rubber seal, and press slowly to force the water through grounds and filter into the cup below. In less than a minute you have highly concentrated coffee without a trace of bitterness, to be diluted with more hot water or milk as you like.

The amazing thing is, it really works as advertised. The manual does make a few silly claims – I have no intention of washing and reusing the small thin filter papers, and the promised “self-cleaning” is limited to the inside of the water tube while the parts that collect the grounds are just as dirty as you’d expect. Still, cleaning takes little extra time compared to a drip machine.

The quality of the produced coffee is indeed remarkable. I don’t think I’ve ever tasted one so totally devoid of bitter and sour notes, thanks to the extremely short steeping time. The same fine grind I use with the Moccamaster works quite well, unlike French presses which require a coarser grind for their coarser filter. As for replacement paper filters, Melitta makes round pieces that are bigger than Aerobie’s but can still be screwed in with a bit more effort, and seem to work just as well.

AeroPress coffee does seem weaker than drip coffee, likely also due to the reduced steeping time. That would explain why the included coffee spoon is veritably gigantic, about the twice the size I’m normally using – the size of “one cup” evidently needs to be adjusted upward, to compensate for the reduced extraction. But that ultimately depends on your taste (or level of caffeine addiction), and AeroPress coffee is certainly not too weak to drink. You can increase extraction by putting more hot water in the tube itself, rather than adding to the cup after brewing. This moves strength and taste a bit towards drip coffee but still results in a very smooth brew.

The manual goes into details on perfect water temperatures reminiscent of Xiao Qiao’s tea ceremony in John Woo’s Red Cliff. I freely admit that I couldn’t be bothered and just took the boiling water off the kettle as usual. The taste of the coffee did not seem to suffer. For €29 or less, the AeroPress is one amazing way to quickly produce reasonable amounts of excellent coffee.