Icarus Studios’ Quarriors! for iPad was released in December 2013 to mixed reactions. The app was certainly pretty but the interface was a confusing mess of taps and swipes, with too many pointless pauses and not enough information for those new to the game. On top of that, the AI players were pretty terrible and seemed to deliberately ruin their own sets of dice.

Many updates and one expansion later, I’m happy to report that most issues have been fixed. Granted, I can no longer judge how accessible the game is to complete newbies, but the help screen now includes a link to the full PDF manual (see below) which should explain everything you’d want to know. The gesture interface was overhauled, and various decorative embellishments can be disabled to speed up the game. Last not least, the “Hard AI” level beat me three times in a row after the latest patch, which had never happened before, and generally acted in a credibly competent manner.

I held off on my review because I waited for these fixes. Now that they have arrived, I can recommend Quarriors and its expansion to everyone looking for a quick fix of simple dice/card strategy with a generous dose of luck. Note that I’ve only played the AI in this game, although multiplayer is supported as well. The very short duration of a full match doesn’t seem worth setting up a GameCenter session for, and to my knowledge Quarriors still lacks turn replay for asynchronous games. Nevertheless, I think the unusual dice mechanics are worth a closer look for anyone interested in board game design.

The Quarriors! board game was designed by Mike Elliott & Eric Lang and published by Wizkids Games. The iPad version is a literal adapation (with animated dice rolling across the screen…) that also includes the Quarmageddon! expansion, easily summarized as “more of everything.” Quarmageddon’s Rulebook (PDF) is linked both from the expansion’s Wizkids page and from the iOS app’s help page. This is the only manual you need, as it includes the full base game rules with a few additions for the expansion.

Quarriors consists of each player building a set of dice afresh in each game, similar to deck building in the card game Ascension. New dice are acquired from a public central area, the “wilds,” in exchange for the currency produced by a player’s current throw of dice. Since everything here must start with Q, the currency is called “quiddity” and the dice in the wild are called “quarry.” Yes, really. 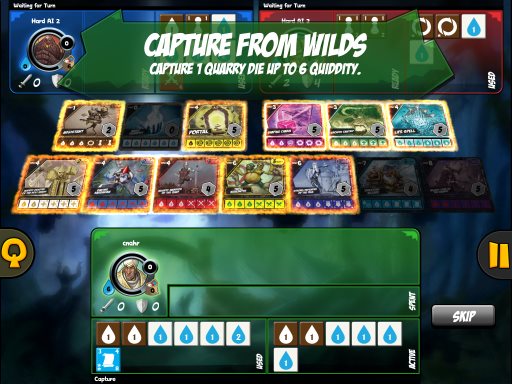 There’s more. You cannot actually use a creature or spell whose side comes up until you “summon” it with quiddity equal to its level, reducing the amount available for capturing from the wilds. So why would you want to summon anything? Because only creatures that have been summoned and survived for a whole round earn you “glory,” the game’s victory points, and also let you cull dice from your bag. Once summoned, your current set of creatures automatically attacks those of the other players, so as to reduce the glory they will earn this round. Defeated creatures immediately go back into their player’s bag of dice without contributing glory or allowing culling.

Since creatures and spells do nothing unless summoned, culling your bag down to only high-level dice is inadvisable. Without some quiddity-only dice, you might throw lots of powerful creatures you can’t summon! While highly random, I find these game mechanics quite intriguing. Quarriors dice effectively combine multiple cards in Ascension or Magic: The Gathering, allowing the compression of surprisingly varied gameplay into a very small number of elements (dice) and turns. A refreshing change from the typical use of dice as mere low-tech random number generators.