After 1.5 years with the Sony NEX-7 (APS-C format) I realized I wouldn’t stop boring people with my amateur pictures anytime soon, so I might as well upgrade to a full-frame camera. I considered the new Nikon D810, a traditional DSLR that got excellent reviews, but eventually settled for the mirrorless Sony Alpha 7R using the same 36 megapixel sensor.

The absence of a mirror makes the A7R body much smaller, lighter, and cheaper – without actually impeding functionality in any way. Mirrors were necessary with chemical film but a digital sensor’s image can be directly projected onto an electronic viewfinder, so there really is no need for a mirror in any digital camera. I suspect their continued presence in high-end models is a cargo cult, with photographers slow to admit their cherished signature technology is an obsolete relic, and manufacturers happy to extract a nice extra profit for as long as they can.

You can see the Sony NEX-7 (left) and A7R (right) next to each other in the iPhone picture below. Both cameras are lying on their left side; the A7R is bulkier only because of the optional vertical grip (Sony VG-C1EM) mounted at the bottom. Without it the bodies are nearly identical in size. Here the NEX-7 shows the SEL-18200 (f/3.5–6.3) ultrazoom lens while the A7R has the SEL-2470Z medium zoom, a splendid Carl Zeiss lens with constant f/4 across its 24–70 mm range. 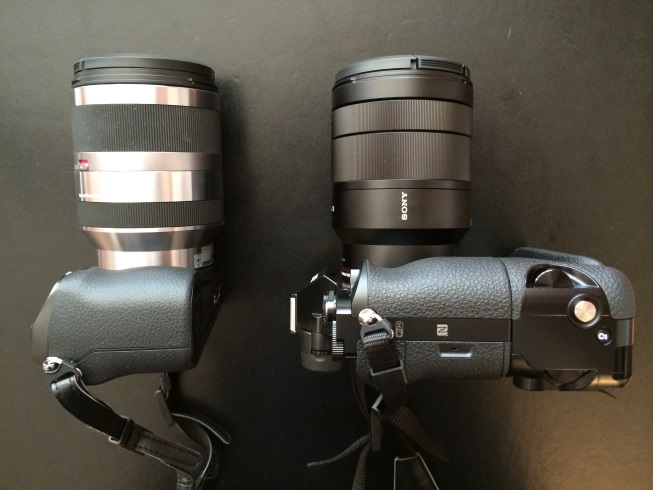 The optional grip isn’t just for convenient vertical operation, but more importantly stores two batteries (Sony NP-FW50) instead of the single one that fits in the camera body. The A7R draws rather a lot of power, and you shouldn’t expect one battery to last through an entire excursion. The grip switches automatically to the second battery once the first is exhausted, saving you from swapping it out manually. Annoyingly, Sony got stingy on accessories: the A7R comes only with a USB charger – which doesn’t work for the grip! At least I could reuse my NEX-7 batteries and stand-alone charger, so I did not have to buy these extras. (There are cheaper third-party options, too.)

I could also reuse my circular polarizing filter and my cherished Marumi DHG Achromat +3/+5 macro filters, as the SEL-2470Z has the same 67 mm diameter as the SEL-18200. Given the lower maximum zoom of 70 mm I’ll probably use the +5 filter a lot more than I did with the 200 mm lens. Sony makes another new constant f/4 zoom lens for the A7 series covering the 70-200 mm range but I don’t have that one yet, and it’s also a different diameter (72 mm). Note that you’ll want to check the firmware version as soon as you get any A7 model – mine was still at 1.0 even though the essential 1.02 update had been out since March.

Overall I got a great first impression of the A7R and SEL-2470Z. There’s finally a proper Auto ISO mode for manual exposure which had been inexplicably missing from the NEX-7, and even a dedicated exposure compensation dial which is applied on top of the automatically measured ISO value. Autofocus is somewhat slow but no worse than the NEX-7, and manual focus adjustment (DMF, “direct manual focus”) is a dream with the automatically zooming 2.4 MP OLED viewfinder.

If the NEX-7 and SEL-18200 often had me fighting to get enough light onto the sensor, the A7R and SEL-2470Z were often too bright even on a cloudy day. Having to raise rather than lower the shutter speed for optimal exposure was quite a new experience! Nor were darker situations in any way problematic – even an ISO 25600 exposure looks decent enough. At reasonable ISO levels noise practically does not exist, despite the very high sensor resolution.

2015-08-21: Recently I got the Sony SEL90M28G macro lens so I no longer need to screw on macro filters. Using the camera extensively, I also found that I like to set the exposure compensation dial to –1 in auto ISO mode. The A7R likes to set ISO rather too high than too low, and I would rather brighten the image a bit in post-processing to avoid the extra noise in dark environments.

2017-03-07: Moved the gallery from my first expeditions with the Sony A7R to a dedicated post.