About a year ago I switched to a stylish ultrabook hybrid, the Sony Vaio Duo 13. While I was overall quite happy with that neat little device, two of its unavoidable compromises eventually got on my nerves: the sheer lack of computational power and the cramped screen space. So after revisiting the current laptop scene I decided that the much-lauded Dell XPS 15 might be just what I’m looking for, especially since it had just been updated with a new ultra-high resolution screen.

To put these devices into perspective for Mac-using readers, the Sony Vaio Duo 13 is comparable to a high-end MacBook Air, and the Dell XPS 15 is the equivalent of a 15″ MacBook Pro with middling configuration. At €1849 the Dell was not cheap but not excessively expensive either, given the fairly generous hardware specifications. So after a couple of days here are my first impressions.

While not quite as nice as the Vaio Duo’s gorgeous carbon fiber body, the XPS 15 still has a very respectable solid plastic body with brushed aluminium cover. And while nobody will mistake the Dell XPS 15 for an iPad, it’s still (just about) suitable for mobile use. My configuration weighs 2.05 kg as compared to the Vaio Duo 13’s 1.34 kg – noticeably heavier but still light enough to move around with one hand. Likewise, the bulkier chassis still fits comfortably on my legs while sitting in a chair.

The Vaio Duo is especially light (for a PC) because it’s designed for optional tablet use, but I found it still too heavy for extended hand-held operation and went back to my iPad for reading. On the other hand, the XPS 15’s extra weight and bulk is acceptable for traditional laptop use, so having tried both formats I’ll probably stick with the 15.6″ size in the future.

The top XPS 15 model comes with a solid workhorse CPU and ample storage space, equivalent to a current MacBook Pro at the same price, although Dell doesn’t let you configure higher CPU speeds or a terabyte SSD. Compared to the Sony Vaio Duo 13, this is where the trade-off made by small ultrabooks with very long battery life is most noticeable: the CPU draws over twice as much power but is also nearly twice as fast. RAM and SSD sizes are doubled as well – for a system that actually costs less overall!

While the Vaio’s Core i7 4650U was adequate for any job I tried it quite often felt a bit sluggish, such as taking an extra second to render a JavaScript-heavy web page. By contrast, the 4712HQ feels as responsive as a desktop CPU during interactive tasks, and greatly outperforms the 4650U in computational jobs such as file compression. The subjective performance boost is greater than benchmarks would indicate, likely due to the two extra physical cores. Modern software is heavily multithreaded, and more cores means a greater chance of threads getting work done rather than blocking. After a year with ultrabook-level performance I must admit it feels good to be back on a legitimately fast system.

Unfortunately the faster hardware takes its toll on battery life, which is roughly half that of the Vaio Duo 13. The system estimates around 4–6 hours, depending on usage. This is just about adequate for me, as I mostly work docked anyway, but it could be a show-stopper for people who need to work outside an office a lot. Dell’s specifications also list a worryingly low battery lifetime of only 300 recharge cycles. I’m making the optimistic assumption that Dell means a complete emptying and recharging of the entire battery which should rarely if ever happen for me.

The good news is that heat drain is very efficient. I don’t know if the two fans (for CPU and GPU) are actually turned off most of the time, but they are definitely completely inaudible even in a quiet room. During interactive use at normal room temperature with low computational load (editing, web browsing) you’ll hear the fan spin up maybe a couple times per hour for a few seconds, removing built-up heat. The rest of the time it’s beautiful silence, just as with a passively cooled tablet or ultrabook.

This does not extend to 3D applications that require the GeForce GT 750M. Playing a game means the fans spin continually at top speed, easily drowning out the built-in stereo speakers. While the XPS 15 can play current games at a reasonable speed and quality level, unlike the Vaio Duo, it’s certainly not an ideal system for the job. The 750M still isn’t that fast, and headphones are mandatory due to fan noise.

The screen looks fantastic and the keyboard is mechanically excellent, but these two devices are also burdened by significant usability failures. First, the screen’s touch input is not nearly as sensitive as on the Vaio Duo or your typical smartphone or tablet. This is made worse by the fact that the ordinary laptop screen hinge isn’t quite solid enough to keep the screen from wobbling during touch input, unlike the Vaio Duo’s rigid contraption for its hybrid tablet/laptop screen. I quite often need to tap the screen multiple times to register a touch, which is not an experience I’ve had with any other touch screen device.

Second, Dell’s touch screen drivers are defective. It’s quite possible for touch input to cease operating entirely while on battery power – because the system simply disables this feature to extend battery life! A helpful Dell user identified and fixed the problem: open Device Manager, go through both the Human Interface Devices and Universal Serial Bus controllers categories, and systematically uncheck the Power Management option Allow the computer to turn off this device to save power for every single built-in device that has this option. After powering down and back up again, the touch screen was now operational on battery power… but expected battery life was shorter by one hour, too.

Lastly, the keyboard layout is nothing short of insulting. As you can clearly see on the below comparison shot, it’s almost exactly the same size as the Vaio Duo 13’s – all the extra space on the bigger chassis is simply wasted! Dell obviously recycled the XPS 13 keyboard in order to save money, leaving its users with four tiny overloaded cursor keys instead of the proper keypad that would have easily fit in the available space. Dell follows Apple’s bad example here: the 15″ MacBook Pro likewise recycles the 13″ version’s mini keyboard. (Apple’s own website hides this fact by only showing the keyboard from the side; CNet clearly shows the wasted space.) Dell probably figured they could get away with it since most reviewers are Macheads. Looking at most reviews, sadly they did. 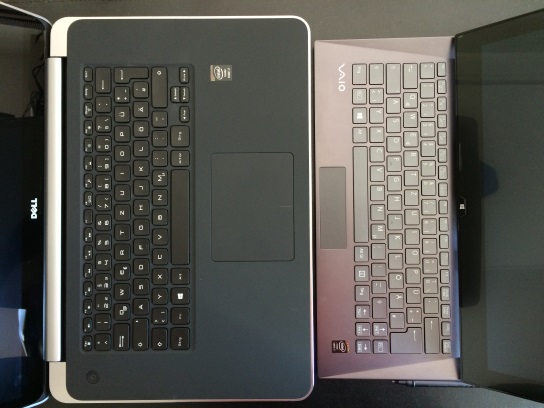 The only reason this isn’t a dealbreaker for me is that I use an external keyboard for real work anyway. The one redeeming feature on the input front is the generously sized touchpad. It’s precise, responsive, and big enough to allow convenient click-dragging. The Dell XPS 15 lacks the Vaio Duo’s digitizer pen which I found a nice mouse replacement, but its much bigger touchpad is good enough so that I don’t miss the pen (and am less annoyed by the wonky touch screen).

The new Ultra HD IGZO2 panel appears to employ IPS like previous versions but Dell doesn’t explicitly state this. Whatever the technology the display is excellent all-around, whether in terms of brightness, contrast, colors, or viewing angles. Dell sets the Windows display scaling to 250% by default, resulting in a layout space of 1536×864 pixels. On the Vaio Duo’s 13.3″ screen, the default scaling of 150% brought the 1920×1080 screen down to an effective layout space of 1280×720, so the scaled display size increased pretty much in line with physical screen dimensions.

Since the Ultra HD panel has a “retina”-level dot pitch of 282 DPI you might feel tempted to use a non-native resolution in exchange for reduced display scaling. Indeed I had in mind to set a resolution of 2560×1440, matching my external Dell U2711 monitor so that I could keep the same scaling and window layout when switching between internal and external display. Unfortunately that turned out to be impossible, as the Windows desktop always runs on the integrated GPU (Intel HD Graphics 4600)… and Intel sets a weird maximum resolution of 2048×1152 for that GPU, with two exceptions: the native Ultra HD resolution configured by Dell, and any resolution accepted by an external monitor connected over DisplayPort. But not over HDMI, and not for the built-in panel!

So I connected the Dell U2711 over DisplayPort to address its native 2560×1440 resolution, but still could not use that same resolution for the built-in panel which therefore continues to run at 3840×2160. Luckily Windows 8.1 supports different scaling factors on different monitors, and setting the U2711 to its appropriate 150% scaling yields a layout space of 1706×960 pixels, close enough to the built-in panel.

Note: Windows 8.1 still gets confused when switching between differently-scaled monitors on the fly. You need to at least log off and on again after changing monitors, or you’ll get wrong system font sizes and blurry bitmap scaling in many places. Not a problem for my workflow, but perhaps for yours.

MaxxAudio is your typical bass/treble & loudness booster to make the cheap RealTek audio processor sound less flat and indistinct. Overall it does a pretty good job, although the stereo space expander sounds weird to my ears. (You can enable and disable all features separately.) iTunes 12.1 produces crackling sounds while playing music but since that only happens in iTunes and appears to be widespread I’m blaming Apple’s crappy programming skills. That said, nobody’s going to mistake the XPS 15 for a professional musician’s or sound engineer’s device…

The preinstalled software presents the usual depressing Microsoft Windows situation. A new Dell XPS 15 must first be liberated from ample crapware: Dropbox, McAfee, MS Office trial, various Dell bloatware, and an Intel Control Center that actually declares itself useless and requests its own deinstallation when you run it! Windows Update then loaded over 2 GB of patches requiring multiple restarts, despite the fact that the installed Windows 8.1 is officially the current version of Windows – a fact that clearly means very little. The edition is Windows 8.1 Standard rather than Professional, so at least I didn’t run into the Vaio Duo’s BitLocker trouble since Standard lacks that feature.

By and large I’m happy with the switch. The better performance and screen resolution are big improvements for me, and I don’t mind the various drawbacks too much. You should definitely be aware of them if you consider buying a Dell XPS 15, however. Here’s a quick summary:

With all these qualifications, the Dell XPS 15 is a powerful desktop-level system in a package small and light enough for mobile use, with solid hardware quality, typically silent operation, and very reasonable cost. I can recommend it, assuming your typical usage profile can accommodate its various downsides.