I recently stumbled over the Logitech K480 at the local electronics store. Apparently the keyboard had been released last September but I only noticed it now. The full name is “Logitech Bluetooth Multi-Device Keyboard K480” which highlights the most important feature: support for Apple Mac OS-X & iOS, Google Android & ChromeOS, and all modern variations of Microsoft Windows including Phone.

I’ve been using the keyboard with my iPad Air and iPhone 5S. Since Apple insists on having different modifier keys than everyone else, the corresponding labels are conveniently doubled on the keys and you need to manually select whether you’re connecting to an Apple device or one by another manufacturer. 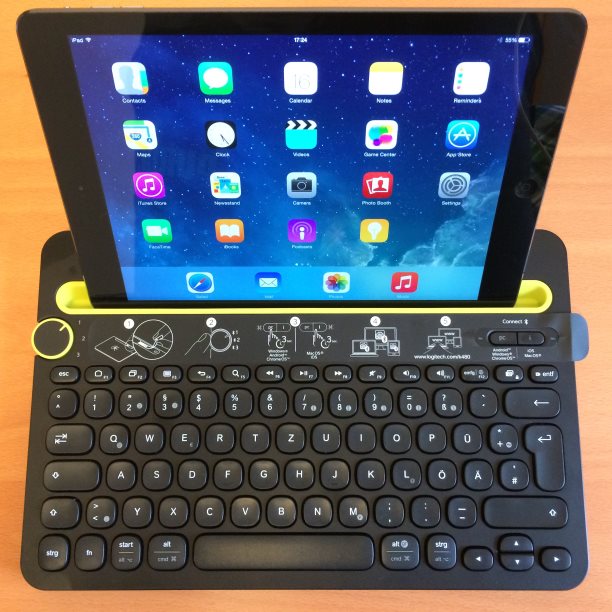 Hence the “Connect” selector in the top right of the screenshot. The big yellow wheel in the top left lets you select between three Bluetooth channels. Having it directly on the keyboard allows switching between multiple registered and connected devices without conflict. The screenshot also highlights the keyboard’s other important feature: there’s a deep rubberized slit at the back to hold tablets or phones in a convenient laptop-like angle. The hold is surprisingly secure and makes the keyboard-tablet combo fully “lappable,” unlike ordinary mobile keyboards such as Logitech’s older Tablet Keyboard.

In addition to a full keyboard layout (German pictured above) with mini cursor keys, as usual in that form factor, the K480 includes a top row of function keys that control system-specific features such as sound volume, playback, screenshots, and search. The extra fn modifier key near the lower left is rather curious as it merely seems to double existing functionality, although selecting words with the left & right cursor keys is a nice shortcut. How do you figure that out, by the way? You’ll have to read the manual and that’s the one disappointment: the manual only exists as a web page. There are no printed or printable versions. I realize the K480 is cheap at only US$50 but come on, a device with so many overloaded functions needs at least a key reference chart!

Another caveat concerns the current Microsoft Surface Pro 3. While technically compatible, it’s just a bit too wide for the rubber slot in the preferred landscape orientation. On the other hand, the K480 doesn’t include a trackpad anyway which you’d probably want for a device running full Windows. The K480 is otherwise a solid recommendation. The unfortunate neon yellow might resemble a toy but the keyboard is actually quite robust. The keys are not large but mechanically sound, and the combination of multi-device support and lappability makes it the perfect future-proof keyboard to keep around for extensive editing on phones & tablets.

Admittedly, the K480 is rather big and heavy – about 800 grams, or nearly twice as heavy as an iPad Air. You definitely can’t fit it in pockets that could hold phones, and you probably don’t even want to lug it around with tablets. So if you’re specifically looking for a mobile keyboard for your mobile devices, you might wish to check out Microsoft’s upcoming Universal Foldable Keyboard. It’s supposed to work with Android, iOS, and mobile Windows – and can be folded to take up no more space than a small tablet. The key quality of Microsoft’s compact “Type Cover” for the Surface tablets was surprisingly good, so this one might be worth waiting for. The price is rather hefty at US$100, though, and as usual with Microsoft it’s definitely unsuited for lap operation.