When I wrote about the audiophile Blu-ray player Oppo BDP-105D back in January 2014, I was using an otherwise fairly simple A/V setup with an analog amplifier for my stereo loudspeakers, and a separate headphone amplifier with virtual surround sound. In closing I mentioned Yamaha’s Silent & Virtual Cinema DSP technologies which might allow me to replace these two units with a single receiver. Well, that’s exactly what I did a week ago…

At US$ 1,200 MSRP, the Yamaha RX-A1040 Aventage is the cheapest A/V receiver in the Aventage series (and I think across Yamaha’s entire product line) that features a proper ESS Technology audio converter: the ES9006 Sabre Premier Audio DAC, a slightly inferior version of the ES9018 Sabre32 Reference DAC built into the Oppo BDP-105D. Smaller models employ nondescript Burr-Brown DACs fit only for rough peasants of poor breeding. More seriously, converting digital audio signals into analog sound waves is part of a modern A/V receiver’s job, so it makes sense to get DAC circuitry of the same high quality you’d want in a digital disc player or stand-alone sound processor.

If you consider buying an RX-A1040, make sure to check its physical dimensions first: it’s a huge square brick with over 43 cm per side that just barely fits in my big A/V shelf. The weight of nearly 15 kg is substantial as well, but not so exceptional for a receiver. Here’s a view of my titanium-colored edition’s front controls, with the ATH-M50x headphones described later. 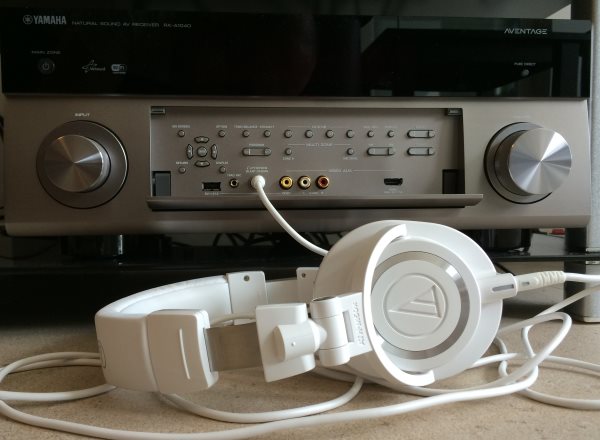 The RX-A1040 is a 7.2 surround receiver with seven built-in amplifiers (each outputting 110–165 W) and oodles of speaker connections. Happily four of those amps can be switched to stereo bi-amp mode, so only three amps go to waste and my two massive Nubert nuLine 102 boxes get plenty of current.

As usual with multi-channel processors the device is preconfigured for surround sound, so you need to enter the somewhat convoluted settings menu to configure full-range stereo speakers (and bi-amp if applicable). Lowering speaker impedance from the default 8 Ω to 4–6 Ω, as appropriate for the nuLine’s 4 Ω, requires yet another hidden startup menu (see p.128 in the manual).

Annoyingly, the 6.3 mm headphone jack with automatic switching sits under the front panel cover, so you have to keep it open to connect headphones. As usual with integrated headphone jacks the output isn’t terribly powerful. Judging from my experience with 38 Ω headphones you probably don’t want a much greater resistance than that, or you’ll have trouble getting a decent loudness.

Most speakers and headphones won’t produce strong bass at normal volume levels without some extra encouragement. My previous setup provided low bass boost through a switch on the headphone amplifier, and through an extra Nubert ATM 102 sound processor tailored to the speakers. The latter sat between the pre- and power amplifier stages, which was possible on my old NAD C 372 analog amplifier but not on the RX-A1040. Fortunately the latter turned out to provide a very solid replacement.

The RX-A1040 features a complete multi-channel equalizer (“Parametric EQ”) that can be adjusted manually, or automatically using an included microphone that monitors a test tone. But if you just want stronger bass with a simple stereo setup, there’s a convenient “Extra Bass” option (confusingly hidden under “Subwoofer” even though it doesn’t require one) that gives a decent but not excessive boost to low frequencies. When activated it applies to speakers and headphones equally. While not quite as precise as the Nubert ATM 102, I’ve yet to come across a source where it sounds inappropriate or unpleasant.

Even with stereo speakers the improvement can be impressive. The RX-A1040 natively supports the Direct-Stream Digital (DSD) multi-channel format of Super Audio CDs (SACD), meaning I finally got to listen to my SACD discs as they were intended to. To be honest, there’s little or no audible difference between SACDs and well-recorded ordinary CDs if you just listen to downmixed stereo tracks. Recreating the spatial sound field from the original DSD channel(s), however, makes a huge difference – even with mere stereo speakers. Tchaikovsky’s first piano concerto never sounded so good!

Manipulations such as virtual surround sound are best applied to digital input signals. However, if you use analog input such as the one produced by the Oppo BDP-105D’s superior DAC, you should enable “Pure Direct” mode. The exact effect in the RX-A1040 is unfortunately not documented; the manual just speaks cryptically of using “the least circuitry” for playback and disabling “some options.” Intriguingly, an AVS Forum discussion claims that Pure Direct entirely skips (re-) digitizing analog input, piping it straight to the analog power amplifiers.

As evidence regarding the RX-A1040, AVS poster kriktsemaj99 claims that “the audio delay (which I’ve measured myself) drops to basically zero for a stereo analog input in Pure Direct mode, which shows it’s not going through the DSPs.” For my part, I can confirm that the Oppo’s analog stereo output in Pure Direct mode clearly sounds more precise and dynamic than its digital output going over HDMI. A combination of better DAC plus bypassing any further sound processing circuitry might do that.

Bass Boost is one of the options disabled by Pure Direct. Interestingly, it doesn’t matter all that much because the improved precision across the entire spectrum largely obviates the need for artificially boosted low frequencies. That depends on personal taste and source quality, though.

Along with my old amplifiers, I had to replace my AKG K701 headphones which weren’t nearly as old. After less then 2.5 years the fabric earpads had become greatly discolored and started reeking! For that price you’d really expect better materials. Moreover, while the K701 sounds great when driven properly (better than the ATH-M50x to be honest), at 62 Ω they are simply useless without powerful dedicated headphone amplifiers. The non-adjustable design also feels uncomfortably tight around my big head. All told I wish I could have kept the K701’s superior sound, but otherwise the ATH-M50x is clearly a better choice. (I do hope the leather padding lasts longer than AKG’s crappy fabric, though!)

So here’s a quick rundown of my new Audio-Technica ATH-M50x monitor headphones. The package includes a leather pouch and not one but three pluggable cables: 3 meters both coiled & straight, and 1.2 meters straight for portable devices. All cables have 3.5 mm plugs, with the two longer ones threaded for an included 6.3 mm adapter as required. The headphones are rated at 38 Ω which means they should – just about – work with outputs that lack dedicated powerful amplifiers. The RX-A1040’s output is fine but I do have to crank up the volume to 2/3 of maximum for some DTS-HD movie soundtracks.

The ATH-M50x features closed, sound-isolating, leather-padded earcups that prevent mutual annoyances between me and my neighbors while still being very comfortable to wear. I saw some complaints online about the bigger sister model, ATH-M70x, concerning fit and bass reproduction while wearing glasses. Personally I had no such trouble with the ATH-M50x. The padding fits snugly around the frame temples, with no discernible effect on sound reproduction. Audio Technica seems to goof off somewhat in the mechanical design of more expensive models – the high-end ATH-R70x has a wacky two-part head support that drew lots of criticism for not holding the headphones in place. I’m happy to say that none of this applies to the ATH-M50x which is perfectly ordinary and perfectly comfortable.