I’ve been running Microsoft’s long-awaited Windows 10 on my Dell XPS 15 (model 9530) for a week now. Yesterday I detailed the changes to DPI settings, today I cover the installation process and my general impressions of the new Windows version. I’m focusing on the traditional desktop experience as I always have a keyboard and mouse (or touchpad) attached. For a very detailed review that also includes tablet mode and cross-device operation, see Brett Howse at AnandTech.

I went from Dell’s preinstalled Windows 8.1 Home to a clean installation of Windows 10 Pro. That wasn’t my first attempt to upgrade; that had been to use the well-known notification icon in Windows 8.1 that many users had opted into. When that utility had downloaded the required installation files it tried to run them daily, but always failed with some incomprehensible error on a par with Something happened.

So I decided to perform an old-fashioned manual upgrade, with a clean installation to get rid of all the accumulated gunk and useless Dell bloatware while I was at it. The exact sequence went like that:

One small but signficant improvement during the installation is an explicit option to skip providing Microsoft account credentials. This option was available in Windows 8.1, too, but Microsoft obnoxiously tried to hide it. Now the link to skip the account login is right on the login page where it belongs.

Overall, the installation worked well. Windows 10 is fully compatible out of the box with the Dell XPS 15 and will download any essential drivers directly from Windows Update. However, I recommend you go to Dell’s driver download page anyway to get some extra drivers that Windows doesn’t find automatically. On my system these included the Synaptics touchpad (greatly enhanced compared to basic Windows support), the STM 3-axis accelerometer, the RealTek card reader, and the Intel Dynamic Platform Thermal Framework driver.

The last one was notable because it resolved a large number of “unknown devices” in Device Manager, yet failed to add the expected tab to the Control Panel’s power plan settings. No idea what happened there. Anyway, for good measure I also upgraded to the latest BIOS, installed all other latest Intel drivers, and got the current GeForce GT 750M driver directly from Nvidia. The system is running smoothly, now let’s see what has changed compared to Windows 8.1.

Of course you’ve heard about the Start menu coming back. Sadly, that’s a lie. The Windows 7 Start menu has not come back. Instead, Microsoft has simply glued the hated Windows 8 Start screen to the lower-left corner of the desktop! You get the same stupid animated phone tiles that blink sports news and weather reports at you. If you do insist on seeing a text list of installed programs, it’s limited to the leftmost column and flattens the folder hierarchy to just two levels, as before.

Should you remove the blinky junk tiles from the large right-hand side of this cruel parody of a Start menu, that part simply remains empty and unused. Fortunately Classic Shell has already been updated for Windows 10 and continues to be a necessity. Alternatively, you could try Tim Anderson’s trick of using Windows Explorer as an ersatz Start menu. Tellingly, this ugly hack is still better than the thinly disguised Start screen Microsoft has served up. 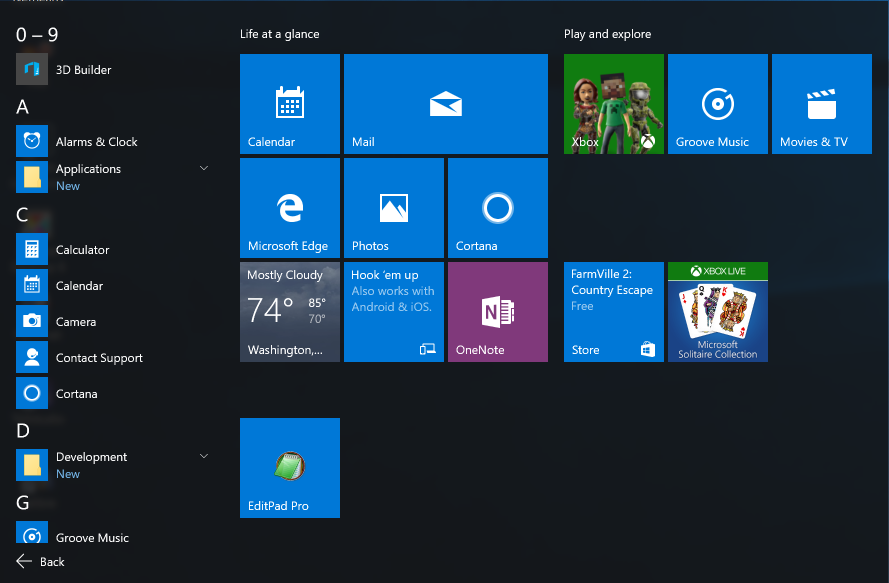 No, I don’t want to play FarmVille

I also noticed that if you disable some default search options, such as Cortana (see below) and indexing of most files, the built-in search accessible from the Start menu and from a dedicated task bar icon becomes ridiculously slow and poor. Meanwhile Classic Shell somehow manages to quickly and efficiently search all relevant places in the system, without any such overhead. Is Microsoft clueless or just passive-aggressively lazy? “You changed our precious default values, no search for you!”

For no apparent reason, Microsoft has removed active window coloring from title bars. The active desktop window is now indicated merely by an incredibly thin colored outline. The title bar itself always remains some default color specified by the application – usually a boring white or grey. Ugly and confusing. As partial compensation, subtle drop shadows around window edges have returned.

Cortana handles natural language search requests (spoken or typed) but also makes essentially your entire system available to Microsoft’s data centers, and whatever state agencies Microsoft shares data with. Here’s the list of information that Microsoft will “collect and use” when you enable Cortana:

your location and location history, contacts, voice input, searching history, calendar details, content and communication history from messages and apps, and other information on your device. In Microsoft Edge, Cortana collects and uses your browsing history.

Thanks but no thanks. I generally recommend going through all available privacy settings (it’s a top menu entry in the new Settings app) and turning off whatever you don’t want, as well as the notorious Wi-Fi Sense under Network & Internet (Wi-Fi: Manage Wi-Fi Settings). More conveniently, you can use the free utility O&O ShutUp10 to centrally disable unwanted information sharing.

OneDrive (née SkyDrive) is now omnipresent as a user folder and task bar icon. You can remove the icon by right-clicking and choosing “Exit” but it will come right back if you accidentally click on the Explorer folder. OneDrive is also configured to start up with the system, so you’ll need to disable that in Task Manager if you don’t want it. There is no option to remove or disable OneDrive entirely, as it’s built into Windows now.

There are a few genuine improvements to the desktop experience. The Alt+Tab task switcher now makes good use of the available screen real estate to show more readable previews of application windows, and a similar static view is available with the new Task View icon in the lower left of the task bar. The Task View also lets you create new virtual desktops but I haven’t tried that feature myself.

Finally, the command prompt has been enhanced to accept the usual copy & paste hotkeys (Ctrl+C/V) so you no longer need to go through the Edit menu to perform these basic tasks. A small change but significant if you work with the command line a lot!

Microsoft has changed terminology again: the enhanced WinRT API that ships with Windows 10 is now called Universal Windows Platform (UWP). Accordingly, I’ll use the term “UWP apps” for what used to be called Metro, Modern, or Windows Store apps.

From a user perspective, the most obvious change is that Windows 10 shows all UWP apps in regular desktop windows while in desktop mode. That would be great news if there were any such apps that anyone actually cared about. I tried the time-honored Solitaire, only to be greeted by a message pushing me to sign into my Microsoft account – and to pay for extra features in this newly “freemium” game. At least you can play in guest mode.

Microsoft compensated for the lackluster Windows Store selection by moving more functionality into built-in UWP apps that you must use, such as the aforementioned new Settings app. Whereas previously this app merely duplicated a subset of Control Panel features, the two are now complementary and must both be used to configure your computer. You read that right: Microsoft’s latest grand usability achievement is to force users to use two complex configuration programs instead of one. They link back and forth between each other, making for a merrily confusing experience.

All notification area balloons have been consolidated into another new UWP-styled application, the Action Center that slides in from the right. (The various “charm bars” that used to occupy this space in Windows 8 have been mercifully removed.) This consolidation is sensible, although Microsoft couldn’t resist nagging for feedback and pushing Office 365 within the first few notifications you get.

The Action Center also contains quick links to the Settings app, various mobile settings such as Airplane Mode, and an intriguing Note button. The latter starts OneNote which ships with Windows 10 as an uninstallable app – and demands your Microsoft account before you can take any notes. Windows 10 also includes a Sticky Notes utility with local storage, but you cannot configure the Action Center to show that (or another program) instead.

The desktop photo viewer is gone, replaced by a new Photos app which is much more awkward if you want to browse all pictures in a given folder. You could launch the old photo viewer with a picture located anywhere, and then continue browsing all other images in the same folder. Incredibly, the Photos app cannot do that, as it completely ignores a picture’s current folder. You have to manually configure any folders where it deigns to pull pictures from!

There’s also the new Edge web browser for both desktop and touch mode. I’ve barely used it because at this point, it doesn’t even support Save As… in its right-click menu! However, it does (finally) support Adobe PDF and acts as the default PDF viewer for Windows 10. On a related note, there is now also a built-in PDF printer device (“Microsoft Print to PDF”).

One laudable improvement is the option to “sideload” UWP apps in every edition of Windows 10, enabled in Settings: Update & Security: For developers. Microsoft explains the implications: you no longer need a Microsoft developer license to create apps, and you can bypass Windows Store distribution and Microsoft certification to download apps from any website. This should make UWP apps much more attractive for internal development and amateur or freeware developers.

One useful piece of documentation Microsoft has made available is the list of shortcut keys for Windows 10. The file format is .docx for MS Office but the current version of LibreOffice can open the file just fine.

Only a single application ceased working after the upgrade to Windows 10, namely my offline feed reader RSSOwl. The program starts up correctly but hangs when trying to show the contents of any feed. Seeing this particular application fail wasn’t too surprising as it’s one of those open source projects that has been essentially abandoned for years. I’ve switched to the equivalent QuiteRSS which works fine and is being actively maintained.

Overall, Windows 10 falls short on its promise to “fix Windows 8” in much the same way as Windows 8.1 did. Yes, it’s another bit better than the absurdly terrible desktop smartphone but it still fails to fully clean up the detritus from that experiment. I’d say it’s a wash between a variety of annoyances on one hand, and some genuine improvements to the desktop experience on the other. If you feel you must finally upgrade your Windows 7 system, Windows 10 is acceptable – if you also install Classic Shell and run O&O ShutUp10. Every Windows 8.1 user will probably want to move on, but beware that the improvements only slightly outweigh the risk and bother of upgrading. There is certainly no hurry.

2015-09-17: Ed Bott’s latest article, Troubleshooting and repairing Windows 10 problems, claims the system is “above average in terms of reliability” – but then goes on to concede that Edge is a “work in progress” and the OneDrive sync utility “a stopgap,” Windows Explorer might require manual restarting when the shell becomes unresponsive (I’ve seen that myself), and issues with Windows Store or new Universal apps might even require “a full Windows reset!” Randall C. Kennedy is perhaps closer to the mark by calling Windows 10 the most unstable release since Windows ME…