Windows 10 just received its first major feature update, only known informally as “Fall Update.” The name was not changed to Windows 10.1 or the like, although System: About in the Settings app now shows the new version tag 1511 corresponding to build 10586. The original release was based on build 10240 with version tag 1507 – I didn’t check but Paul Thurrott did. He also provides a partial rundown of new and changed features, with some more covered by Brett Howse.

First, some notes on the installation. It’s very lengthy – you should schedule at least an hour or two – and may seem to get stuck after the first reboot. As I later figured out, this is likely when the update replaces all your device drivers for which an equivalent is found in the central Microsoft driver repository! For most of the devices in my Dell XPS 15 that was fine, but Microsoft’s drivers for my Dell XPS 15’s two GPUs (Intel HD 4600 and Nvidia GT 750M) were outdated compared to the manufacturer releases. That’s how I noticed the great driver reset: Microsoft’s old version of the Intel driver is horrendously buggy and causes constant display driver crashes and restarts even with built-in Windows applications. Those subsided once I had manually switched back to the current Intel driver.

Unasked, the update uninstalled the harmless little Piriform Speccy utility, claiming incompatibility with the new Windows version. When I reinstalled the same Speccy version after the update, it worked just fine. Moreover and equally unasked, a large number of file extensions (in particular PDF and web-related) were reset from third-party to Microsoft applications, even though the third-party applications were still present and working. And of course the annoying Office 365 advertising notifications were silently re-enabled. At least the excellent Classic Shell remains fully compatible, after a brief self-reconfiguration following the update.

Microsoft treats this update as a full-fledged Windows upgrade, so you get a gigantic C:\Windows.old folder with the original Windows 10 as well as sizable upgrade helper files. You’ll want to get rid of all those by running Disk Cleanup with the Clean Up System Files function and regain about 22.7 GB of disk space. Annoyingly, this still left some empty folders under C:\Windows.old which I could only delete by manually reassigning ownership and permissions. Lastly, you should re-run O&O ShutUp10 to re-enable any privacy settings the update has switched off.

2015-11-16: Speaking of privacy, after a few reboots Windows popped up a notification stating “WiFi Sense requires my attention. Tap here to fix it.” Can you guess what “fix” means? That’s right, clicking that notification immediately re-enabled WiFi Sense which I’ve disabled via ShutUp10! Disgusting.

2015-11-20: Gordon Kelly has a roundup of reported issues, including the update hanging when an SD card is inserted (!?) and unwanted removal of numerous systems monitoring programs.

I refer you to the articles linked above for a fairly comprehensive list of changes. Here are a few that stood out to me. First of all, the new and improved interface for editing environment variables. The main window is now resizable, and the %PATH% editor actually presents a list of individual directories! 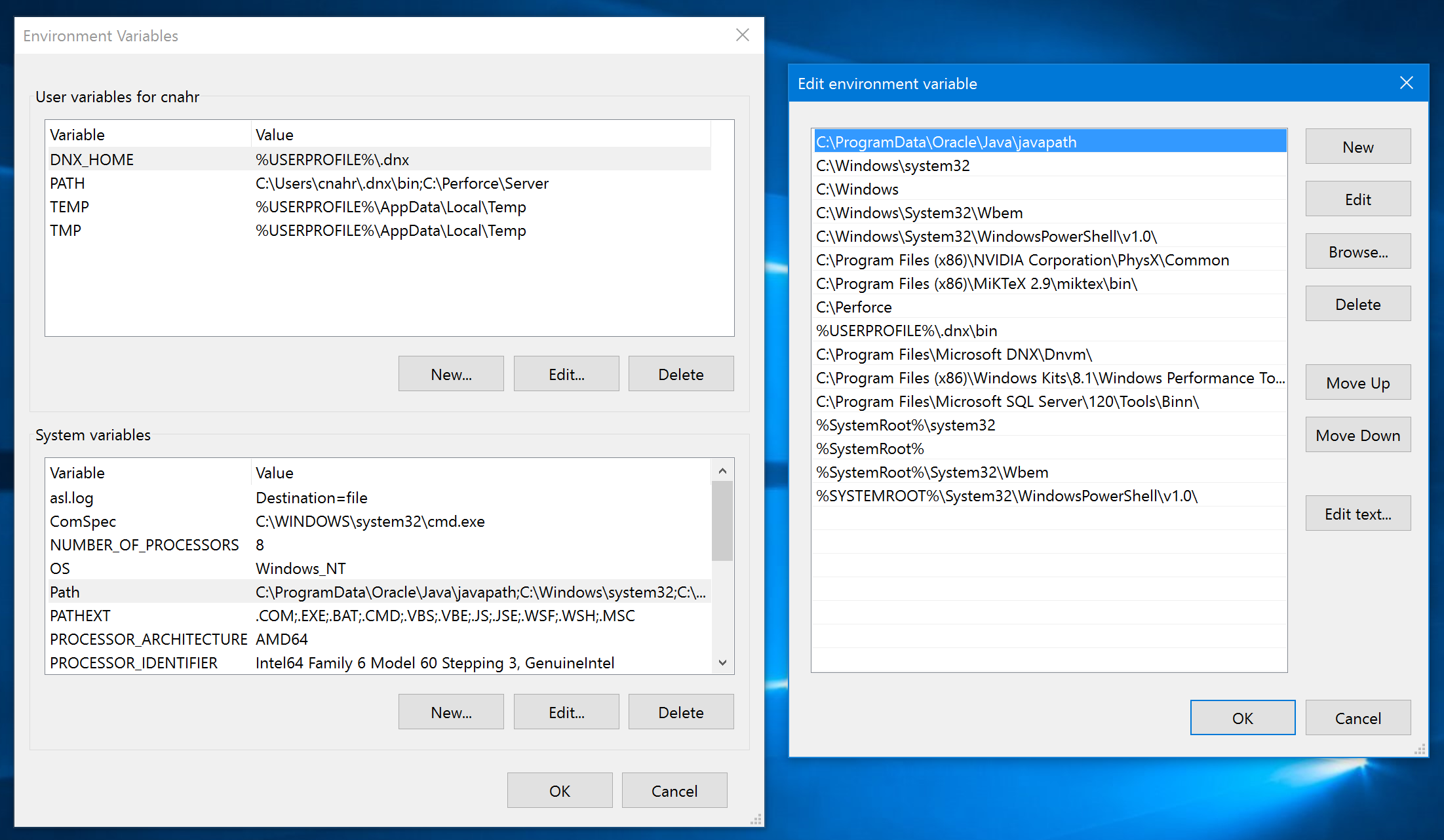 You can also restore colorization of the active window title bar which was one of my complaints about the original release. In the Settings app, go to Personalization: Colors and enable the option “Show color on Start, taskbar, action center, and title bar.” The title bar part is new in the fall update, and causes the title bar of the active window to show the configured color while that of any inactive window remains white. There’s one catch, though: new applications (mostly built-in Windows apps) that already employ Windows-10-style custom title bar coloring are not affected by this setting.

I briefly checked that Microsoft’s Edge browser now has a proper right-click menu that lets you save link targets to disk, among other improvements. Hallelujah. I still don’t feel compelled to switch from Firefox, but at least Edge is a workable option now. Finally, one item I didn’t notice myself but found humorous for nostalgic reasons: the dynamic memory compression that some third-party utilities provided in the bad old days of expensive RAM is now built into Windows, presumably to facilitate running on mobile devices with little physical RAM.

In Windows 10, we have added a new concept in the Memory Manager called a compression store, which is an in-memory collection of compressed pages. This means that when Memory Manager feels memory pressure, it will compress unused pages instead of writing them to disk. This reduces the amount of memory used per process, allowing Windows 10 to maintain more applications in physical memory at a time. This also helps provide better responsiveness across Windows 10. The compression store lives in the System process’s working set. Since the system process holds the store in memory, its working set grows larger exactly when memory is being made available for other processes. This is visible in Task Manager and the reason the System process appears to be consuming more memory than previous releases.