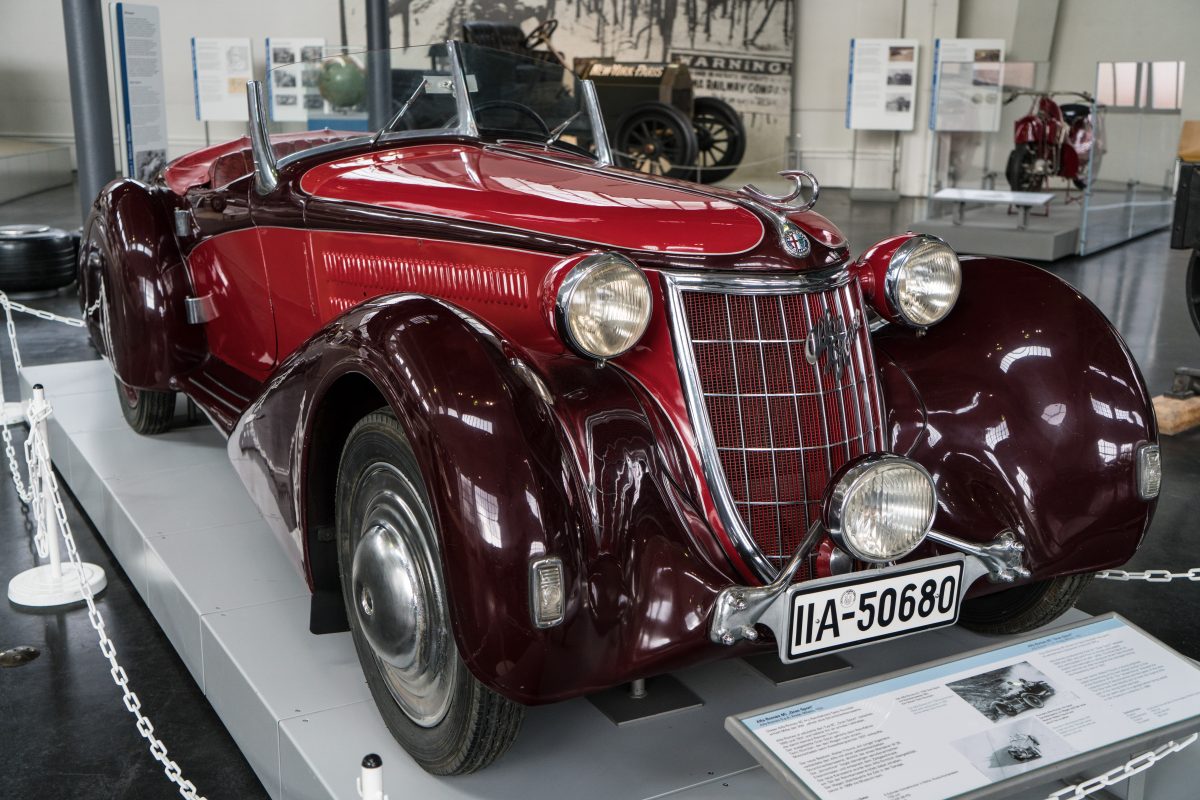 Part of the many exhibitions organized by Deutsches Museum is the Verkehrszentrum (Traffic Center), residing in Munich like its parent though halfway across town. Three great halls hold hundreds of horse-drawn carriages, bicycles, motorcycles, automobiles of all ages, locomotives, and train cars, as well as some artifacts of ancient transportation and interactive demos of various motors, axles, and brakes. Most vehicles are preserved from their original production runs, with only a few replicas to spoil the fun (but even those tend to be a hundred years old by now).

You can find my extensive photo gallery at the end of this post. The images are ordered by eras and types: pre-World War I, interwar time, post-World War II, racing cars of all eras, classic locomotives, and horse-drawn or man-powered vehicles. Click on any picture to enter a full-screen gallery view with descriptions and Exif data. The next section gives some details on my equipment.

I toured the halls with my new Sony Alpha 7R II and my trusty Carl Zeiss SEL-2470Z f/4 lens. A polarizing filter is mandatory for shooting in a museum (I’m using B+W MRC Nano XS-PRO) due to the annoying reflections in windows and the glass cages around many exhibits. I left the shutter speed cautiously at 1/100 because the A7R tended to blur handheld shots at 1/60 and sometimes even 1/100. In retrospect that was too cautious – one of the A7R II’s improvements is greatly reduced shutter vibration, and not a single picture was less than perfectly sharp. I’ll reduce to 1/60 in future low-light excursions.

No big deal though, as the combination of (finally) uncompressed RAW images and the A7R II’s once again improved low-light performance meant that even ISO 10,000 looked perfectly acceptable. As usual I left in-camera processing at neutral and post-processed in Adobe Lightroom to add some contrast punch and adjust the lighting. Regarding the latter, I wanted to make sure that the complex undercarriages of all those beautiful old engines came out clearly, so I generally lifted light and shadows more than I would have for normal shots. The slightly overexposed look is therefore intentional.﻿

2017-03-12: Moved gallery from Google Photos to my own host. The full JPEGs are scaled down from A7R II to A7R resolution, sadly necessary to work around a WordPress upload issue.