I rather happily used a Dell XPS 15 for the last 1.5 years, but there was no denying that its NVidia GT 750M mobile video card was getting rather long in the tooth. It could just about handle the Steam edition of Rise of Nations at 1080p but even the more complex Zen Pinball tables were effectively unplayable at that modest resolution, with poor framerates and enormous gamepad input lags. There was essentially no chance that I could play the upcoming Civilization VI on that system and not go insane. So, time for another upgrade.

What I didn’t want was another huge noisy tower as in the bad old days. The new system had to fit on the desk next to my monitor. However, I also found I didn’t really have a need for another touch screen laptop. Microsoft’s Ballmer-era attempt to mobilize and touchify Windows has essentially stopped after Nadella’s succession, with a full reversal to traditional desktop focus, and the new iPad Pro with folding keyboard (a shameless Surface clone but a good one) serves my mobile computing needs very well. I was essentially only using the Dell XPS 15 in a stationary desktop role anyway.

So there was no point in getting some hugely expensive gaming laptop with minuscule battery life and still mediocre specifications, compared to a corded desktop system. Instead I started looking at compact gaming desktops, and ultimately settled on the Alienware Andromeda X51 R3 (another Dell product). Here’s a comparison picture of the (still shrinkwrapped) X51 next to the Dell XPS 15 – it’s obviously not as thin but hardly any bigger in its two major dimensions! 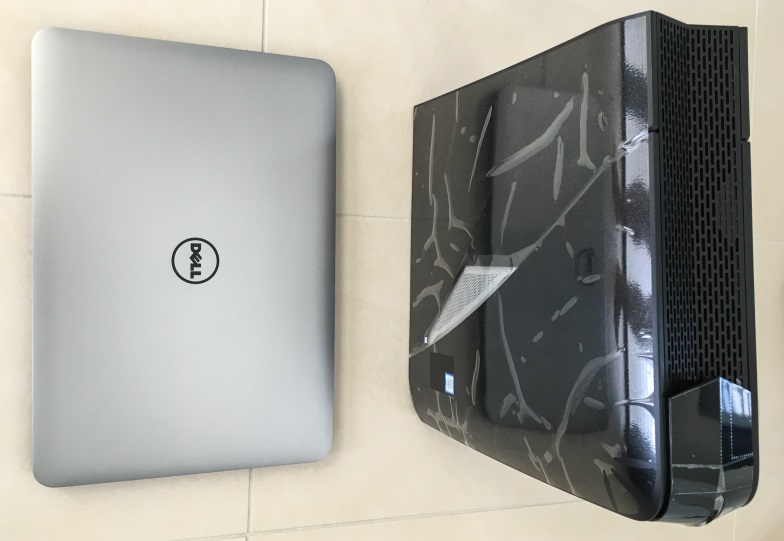 Dell makes several different Alienware desktop series, most of which are bigger than the Andromeda X51 and closer in size to traditional mini towers. Sadly, the Andromeda X51 series has been discontinued at this point and the top configuration I wanted was not available from the German Alienware website, but I managed to get one from German retailer Alternate. In particular, this model replaces the usual NVidia GTX 960 card with the considerably faster GTX 970. Check your local retailers if you’re interested in this model, there should still be some in the warehouses until they’re all sold out.

The X51 series is advertised with one HDMI display output but this is misleading. That output is active only in models that ship without a discrete graphics card – rather pointless for a gaming system! As you can see in the picture below, any model that does include a graphics card has the HDMI port (top right) closed and instead exposes the connections of that graphics card (bottom left). In my case, the GTX 970 offers its own HDMI and DVI ports as well as two mini Display Ports which is what you’ll want to use.

The strange wide plug between the two USB columns is intended for an external Alienware Graphics Amplifier card. Again, this is pointless with a built-in GTX 970 so I have no intention of using it. Finally, the little round plug in the upper left is for the power supply. In this small form factor something had to give, so the X51 comes with an external power brick whose output connects here.

Speaking of small form factor, there’s no optical drive either. Some lesser models have one but the combination of liquid cooling and GTX 970 take up too much space here. No big deal of course, USB DVD drives are cheap and work just fine. Limited space is also the reason why the SSD is a small M.2 model plugged into the motherboard – the sole 3.5″ drive bay is occupied by the spinny Seagate drive. I would have liked a single 512 GB SSD instead but that wasn’t on offer for this model.

How can this small case accommodate an i7 6700K? Alienware made a tiny custom water cooler that sits directly on the CPU, in place of the normal fan. Hot Hardware’s review shows a detailed breakdown of the internal parts where you can see how it all fits together.

Alienware ships a mouse and keyboard with the system but I didn’t bother unpacking them, as I already have my own Microsoft Ergonomic Keyboard 4000 and Logitech G502 mouse. There’s also a strange Alienware resources CD whose files are on average ten years old. I guess few people ever bother using it, and neither did I.

The preinstalled Windows 10 Home (64 bit) comes with the usual nuisances: McAfee virus scanner and Office 365 trials, here in no less than six languages, each requiring a separate tedious uninstallation. On the plus side, the included Dell SupportAssist based on PC Doctor is actually pretty good, and the Alienware system monitoring software with fan speed and overclocking controls looks solid, and indeed essential. That’s a good deal better than the usual bloatware, so I decided to keep both rather than wiping the system as I usually do.

As far as I can tell, performance is exactly as you’d expect from these well-benchmarked parts so I didn’t bother running my own tests. Certainly, the Zen Pinball tables the XPS 15 struggled with are running more smoothly than the highly optimized PS4 versions, even with reflection effects enabled.

That leaves the question of noise. The X51 is not actually silent like a laptop when its fans are off or spinning slowly, but it’s relatively quiet in idle mode, generally omitting a low hum reminiscent of a refrigerator. A truly silent system with these specifications in this form factor is likely impossible. On the upside, the noise doesn’t seem to get much worse under load – the high-pitched whine of the Dell XPS 15 when I pushed it was more noticeable.

Given current technical constraints, the Alienware Andromeda X51 R3 with Core i7 6700K and GTX 970 is a very neat little powerhouse at an acceptable total price of €1800 – somewhat less than I paid for the not much smaller and vastly less powerful Dell XPS 15 (model 9530). Indeed, the X51 is still decently portable. It won’t fit in a backpack’s laptop pocket but it should fit in the main compartment quite easily. If mobile use is not a requirement the X51 is a great compromise between size and power.