Most JavaFX layout containers (base class Region) automatically position and size their children, so clipping any child contents that might protrude beyond the container’s layout bounds is never an issue. The big exception is Pane, a direct subclass of Region and the base class for all layout containers with publicly accessible children. Unlike its subclasses Pane does not attempt to arrange its children but simply accepts explicit user positioning and sizing.

This makes Pane suitable as a drawing surface, similar to Canvas but rendering user-defined Shape children rather than direct drawing commands. The problem is that drawing surfaces are usually expected to automatically clip their contents at their bounds. Canvas does this by default but Pane does not. From the last paragraph of the Javadoc entry for Pane:

Pane does not clip its content by default, so it is possible that children’s bounds may extend outside its own bounds, either if children are positioned at negative coordinates or the pane is resized smaller than its preferred size.

This quote is somewhat misleading. Children are rendered (wholly or partially) outside their parent Pane whenever their combination of position and size extends beyond the parent’s bounds, regardless of whether the position is negative or the Pane is ever resized. Quite simply, Pane only provides a coordinate shift to its children, based on its upper-left corner – but its layout bounds are completely ignored while rendering children. Note that the Javadoc for all Pane subclasses (that I checked) includes a similar warning. They don’t clip their contents either, but as mentioned above this is not usually a problem for them because they automatically arrange their children.

So to properly use Pane as a drawing surface for Shapes, we need to manually clip its contents. This is somewhat complex, especially when a visible border is involved. I wrote a small demo application to illustrate the default behavior and various steps to fix it. You can download it as PaneDemo.zip which contains a project for NetBeans 8.2 and Java SE 8u112. The following sections explain each step with screenshots and pertinent code snippets.

Starting up, PaneDemo shows what happens when you put an Ellipse shape into a Pane that’s too small to contain it entirely. The Pane has a nice thick rounded Border to visualize its area. The application window is resizable, with the Pane size following the window size. The three buttons on the left are used to switch to the other steps in the demo; click Default (Alt+D) to revert to the default output from a later step. 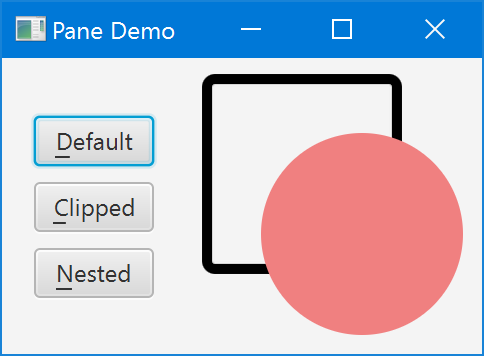 As you can see, the Ellipse overwrites its parent’s Border and protrudes well beyond it. The following code is used to generate the default view. It’s split into several smaller methods, and a constant for the Border corner radius, because they will be referenced in the next steps.

Surprisingly, there is no predefined option to have a resizable Region automatically clip its children to its current size. Instead, you need to use the basic clipProperty defined on Node and keep it updated manually to reflect changing layout bounds. Method clipChildren below show how this works (with Javadoc because you may want to reuse it in your own code):

Choose Clipped (Alt+C) in PaneDemo to render the corresponding output. Here’s how that looks: 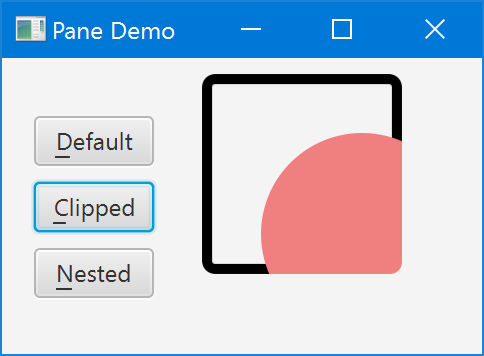 That’s better. The Ellipse no longer protrudes beyond the Pane – but still overwrites its Border. Also note that we had to manually specify an estimated corner rounding for the clipping Rectangle in order to reflect the rounded Border corners. This estimate is 3 * BORDER_RADIUS because the corner radius specified on Border actually defines its inner radius, and the outer radius (which we need here) will be greater depending on the Border thickness. (You could compute the outer radius exactly if you really wanted to, but I skipped that for the demo application.)

Choose Nested (Alt+N) in PaneDemo to render the corresponding output. Now everything looks as it should: 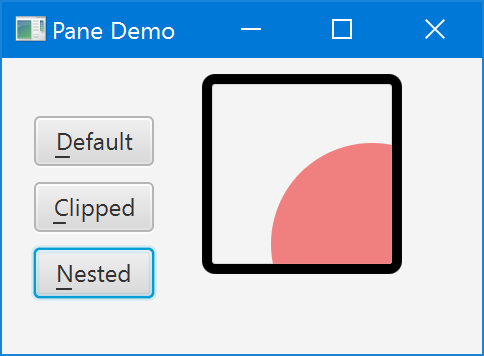 As an added bonus, we no longer need to guesstimate a correct corner radius for the clipping Rectangle. We now clip to the inner rather than outer circumference of our visible Border, so we can directly reuse its inner corner radius. Should you specify multiple different corner radii or an otherwise more complex Border you’d have to define a correspondingly more complex clipping Shape.

There is one small caveat. The top-left corner of the drawing Pane to which all child coordinates are relative now starts within the visible Border. If you retroactively change a single Pane with visible Border to nested panes as shown here, all children will exhibit a slight positioning shift corresponding to the Border thickness.

2016-11-07: Carl Walker of Bekwam was kind enough to add this post to the JavaFX Documentation Project where you can find it under Section 4.3: Clipping. There’s plenty of other useful JavaFX information in this fast-growing project, so be sure to check it out!

2017-01-16: Commenter Anne W discovered that my “nested” solution only works for small corner radii. The reasons are twofold: a Rectangle’s arcWidth and arcHeight properties specify diameters rather than radii as I had mistakenly assumed – but those diameters also seem to be measured somewhat smaller than twice the inner radius of a Border.

For a BORDER_RADIUS of 10, an intermediate factor of 1.6 seems to give good visual results. If you have fixed corner radii you could simply experiment and hard-code the best-looking factor. Otherwise, you might follow Anne’s advice and use another overlaid Rectangle instead of a Border so you don’t run into this annoying conflict between the rounded corner measurements of these two classes.