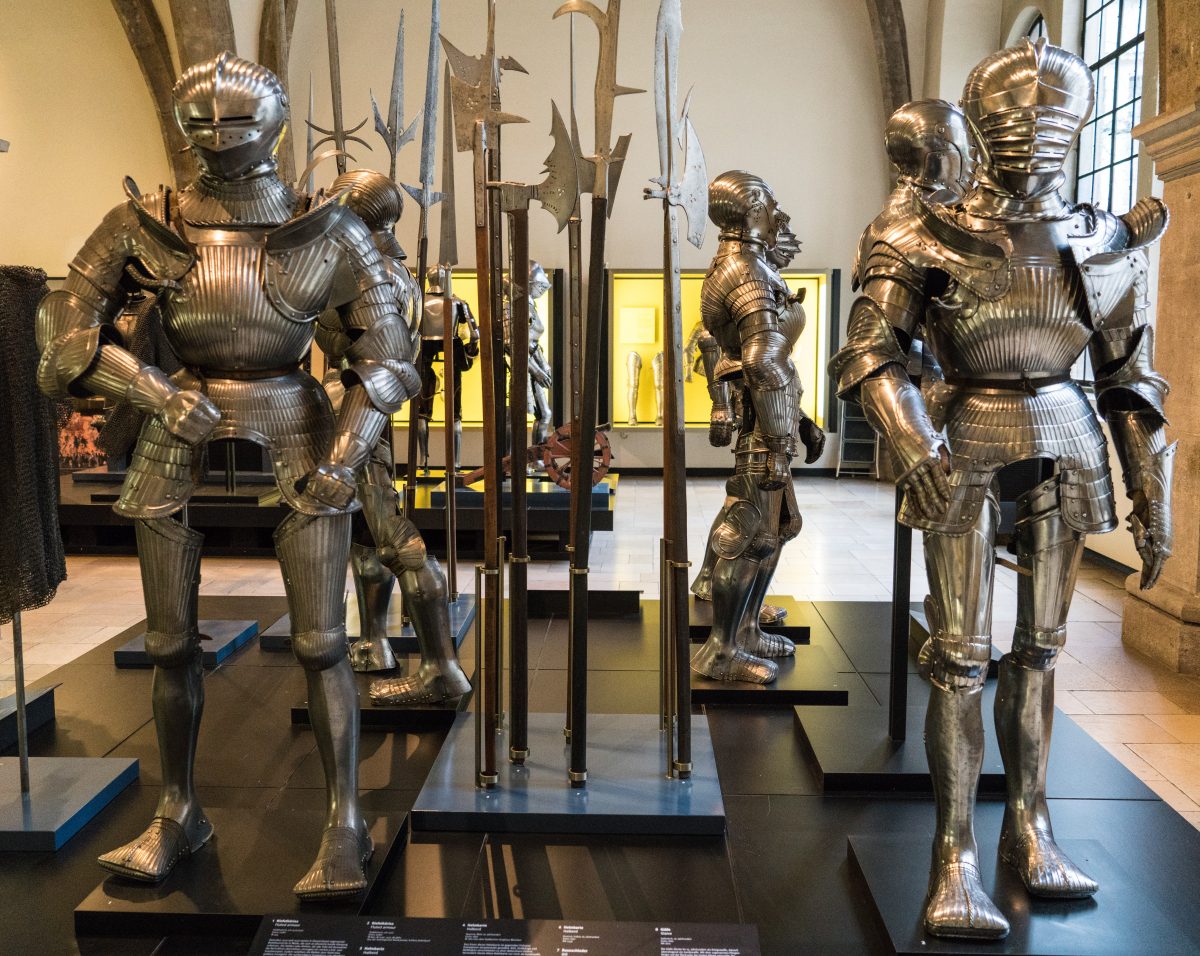 The Bavarian National Museum in Munich (English overview) holds a vast store of Bavarian and European art and other cultural artifacts. One of its rooms displays late medieval and early modern armor and weapons. A few days ago I took pictures of the most interesting items, which is really most of them – it’s a great collection! Some weren’t good enough to be published but you can find the remaining 32 in the gallery at the bottom of this post. The next sections give some details on my equipment, plus surprising facts about Adobe Lightroom. Scroll down to see the gallery itself, and click on any image to enter a full-screen gallery view with descriptions of each subject.

All shots were taken with a Sony Alpha 7R II using the Carl Zeiss SEL-2470Z f/4 lens. The museum is fairly dark to preserve its exhibits, and bans camera flashes too, so I kept the shutter speed at 1/60 and the aperture at f/4 throughout in order to achieve reasonable ISO values. The A7R II has such a quiet shutter that nearly all 1/60 shots were sharp, but the shallow focus of f/4 was a bit problematic in some pictures. That’s something you only see clearly in post-processing, unfortunately.

I took two rounds of the room, with and without a polarizing filter so as to remove reflections from those subjects housed in glass cases. That didn’t work too well, though, due to the large number of spotlights coming from different directions. In particular, all pictures of the sword collection and of one horse armor set were unusable due to glass reflections. Too bad.

All pictures were contrast-enhanced and most were also lighting-adjusted and cropped in Adobe Lightroom, of which more in the next section.

This is the first gallery of full-frame photos I publish directly on my blog rather than Google Photos, so image size became an issue. The A7R II’s 42.4 MP sensor produces RAW images that are nearly 82 MB each. Adobe Lightroom’s JPEG export with a quality setting of 95 shrinks them to around 30 MB, which is still rather hefty for self-hosting. So I searched for some guidance as to how far I might reasonably reduce export quality.

What I eventually found was Jeffrey Friedl’s Analysis of Lightroom JPEG Export Quality Settings, and excellent and very surprising article. You see, Lightroom’s 0-100 scale for JPEG export quality actually maps to an arbitrary step scale of only 13 different compression settings – and “0” is about equivalent to a quality of 50 in other JPEG creators!

Friedl measured the various steps and demonstrates them interactively in his article. Setting 95 which I previously used is actually equivalent to 100, i.e. almost no quality loss at all – suitable for archiving and reimporting. The Lightroom default setting of 75 is only three secret Adobe steps down from there, and still so good that even pixel zoom shows few differences. Nevertheless, image size typically shrinks by two thirds at that level! JPEGs of 8-10 MB should be manageable for both my server and my visitors, so that’s what I settled on for this gallery.