Tired of the feature bloat in PC strategy games like Sid Meier’s Civilization VI? Midjiwan’s mobile 4x title The Battle of Polytopia is the perfect antidote. Called “Super Tribes” on release in early 2016 and reviewed under that name at Pocket Tactics, Polytopia continues to be supported by its developer and has recently received a major update.

The app is free and contains neither advertising nor any expendable in-game items you might have to buy, only additional tribes as IAP. Four tribes come with the free app which is otherwise fully featured, as well as robust, responsive, and fully playable even on a phone. From a technical perspective the only downside is sparse documentation on game mechanics, so if you find anything confusing you should check out the fan-made Wikia pages.

The Battle of Polytopia always takes place between 2–4 tribes on a 15×15 grid of squares with randomly generated terrain. The cute Lego-style graphics are remarkably clear and pretty. Below you see my mighty Bardur (quasi-Vikings) wolf-riders take on the doomed Imperius (pseudo-Romans). 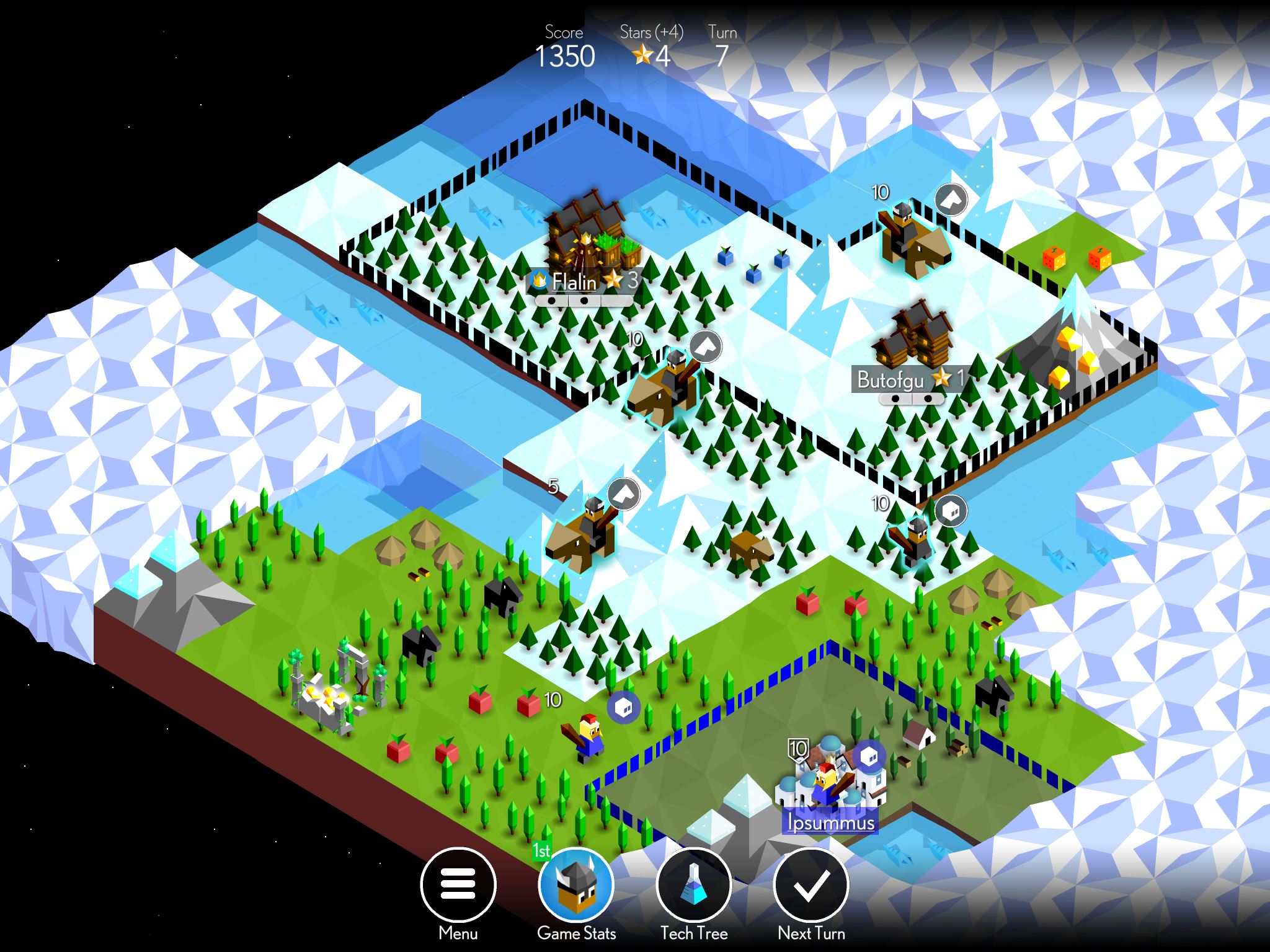 Gameplay follows the standard 4x scheme: build units, research technologies, increase population and production, take over neutral villages and enemy cities. The two victory conditions, selectable at the start, consist of either reaching the highest score after 30 turns or eliminating all opponents. There is neither diplomacy nor foreign trade, so it’s all-out war. AI enemies will attack whenever they feel strong enough to do so, and so should you.

One major simplification compared to the PC classics went perhaps a bit too far: there is only one collectable resource, symbolized as stars, that acts as universal currency. You spend stars to research technologies, build units, and construct terrain improvements. (There are no city improvements though some equivalents can be built on terrain tiles, such as forges.) Units only require stars and technologies, no other prerequisites such as natural resources or buildings.

Some actions such as exploring terrain only increase your score. Harvesting natural resources and placing improvements provides stars and/or population points for the nearest city, whereas “wonders” that are rewards for mini-quests usually provide both a score and population bonus. Growing your cities is paramount as each size level earns an extra star per turn, as well as an extra unit support slot.

Moreover, whenever a city grows you get to choose one of two rewards. These might be city walls, bonus stars, border growth, or the coveted “super unit” – a giant with exceptional health and combat strength. Speaking of combat, you get your usual medieval unit mix of slow and fast, melée and ranged, land and sea, and specialized attackers or defenders. Damaged units can be healed by taking no action. Surviving enough battles promotes regular units to veteran status with extra health.

While simple this system covers all the essentials. You don’t need to maintain a fleet of ships; all units turn into warships when entering a port. Land movement is accelerated by roads which also provide population boosts to the connected cities. The latest update has even introduced a “mind bender” unit that acts as an Age of Empires priest: it can heal friendly units and convert enemy units to your side.

Online multiplayer is currently under development, so for now you get to play against other people on the same device (pass-and-play) and/or against the AI at four difficulty levels. The AI isn’t terribly bright but quite active. You should soon be able to always beat the default “Normal” level; in my experience the AI never comes close to matching my empire development so I can just steamroll them eventually.

“Hard” is more of a challenge, apparently because the AI starts out with some bonus stars which it uses to build a formidable early-game army. Such games are still usually winnable, though, and while I’m not a fan of AI cheating it’s not too outrageous and produces about the right degree of challenge. I didn’t see any blatant rule-breaking as in the preposterous Civilization Revolution where enemy ships would periodically spawn free units.

The original release featured only the 30-turn high score hunt. In my opinion that was a big mistake which probably hampered the popularity of Polytopia. Competing with either the slow-developing AI or the unbeatable experts that lead the global high score table is simply not much fun. Fortunately that was soon fixed with the introduction of a proper elimination victory.

Given that Polytopia is free on both iOS and Android, there’s really no excuse for any fan of strategy games not to download it immediately. It’s an outstanding design in almost every respect that provides a perfectly condensed half-hour experience of classic Civilization gameplay.

One thought on “The Battle of Polytopia”