Colt Express is Asmodee’s digital adaptation of the eponymous Ludonaute game whose website also offers the PDF rulebook for download in various languages. To get the technicalities out of the way, Colt Express is available for iOS, Android & Steam. I’ve played the iOS version (on iPad) which is up to Asmodee’s usual high standards. The original cardboard setup has been replaced with beautiful cartoon animations, without in any way hindering the user interface which is as simple and intuitive as one could hope for. The screenshot below shows my Tuco shooting Doc in the next train car. 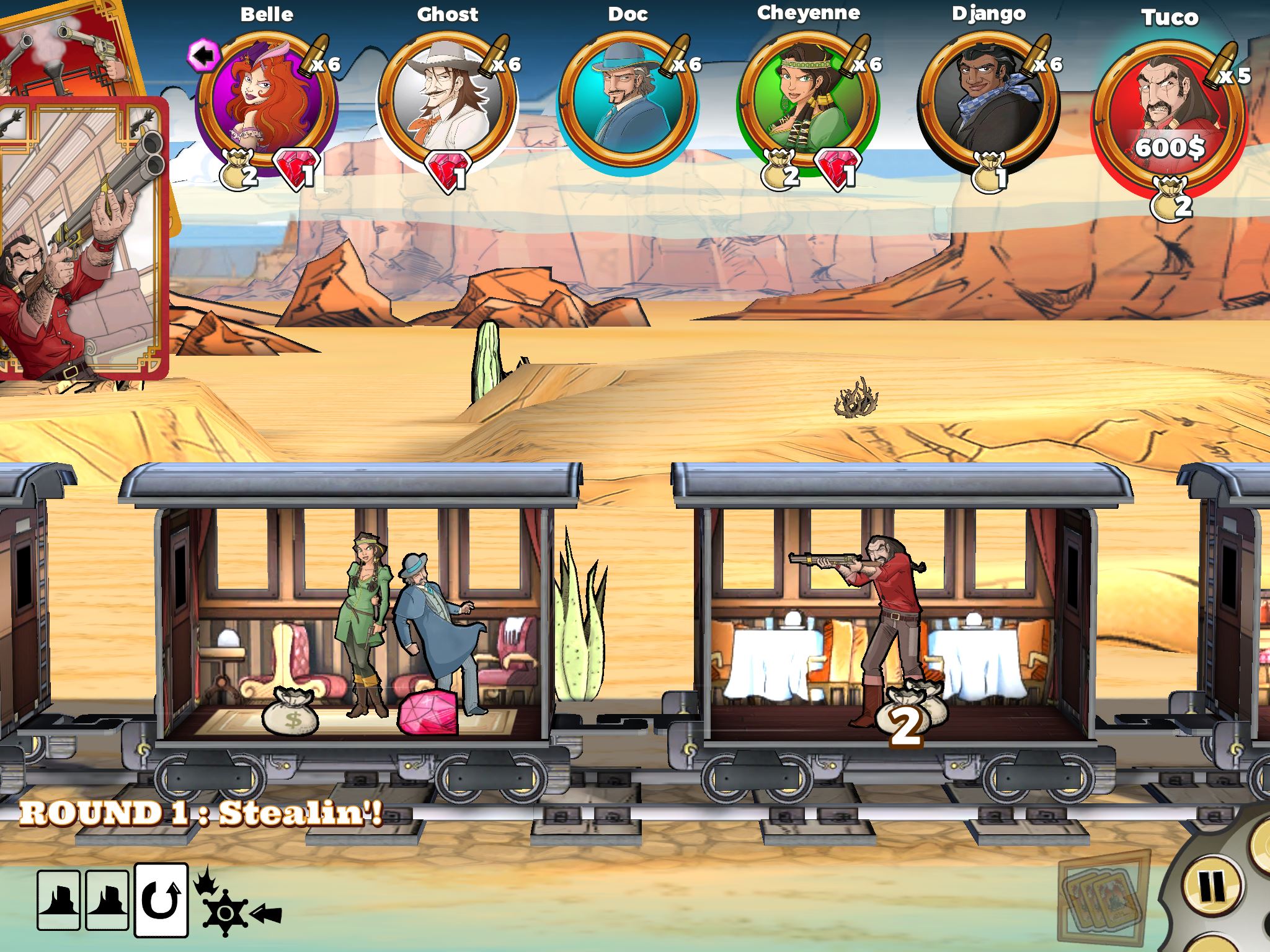 The setting is a spaghetti Western mélange with a gang of 2–6 bandits robbing a moving train. That sounds cooperative but these bandits are competing with each other, both for the most loot and for taking the most shots at other bandits. There are no NPCs to shoot, only a Marshal who moves through player actions and forces any bandits to evacuate his current train car. However, what’s most interesting about Colt Express is neither the app quality nor the unusual setting but the remarkable game mechanics.

All Colt Express player actions are programmed in advance. The planning phase is called Schemin’ and involves each player in turn playing an action card from his hand. These cards are not executed at this point but merely accumulated, up to a number specified by the current round card. Actions include moving to another train car; switching between interior and roof of the current car; punching or shooting another bandit; grabbing loot at the current location; or sending the Marshal to another train car.

Moving and attacking usually allows a choice of direction and/or target. To add another twist, this choice is not made during the planning phase but during the execution phase. So while you can usually see the actions planned by other players (except when the round card specifies a tunnel), you must still take a guess at their likely future choices of direction and target. Conversely, your own choices may let you compensate for unexpected actions by other players.

The execution phase is called Stealin’ and allows only the aforementioned choices of direction and target. Otherwise, every action card must be played in order, if at all possible. This means that if you guessed your competitors’ moves wrong, you might well attempt to attack a nonexistent target or grab some loot that is no longer there. In this case your action is simply wasted.

Punching another bandit who is already carrying loot forces him to drop some of it, which is the only way to rob other bandits. Shooting another bandit depletes one of your six bullets while adding a bullet card to the target’s action cards. These bullet cards do nothing; their effect is simply to dilute the other player’s hand so as to reduce his valid action choices during planning.

All bandits have a useful special ability of some kind. For example, Tuco may shoot other bandits in the same train car, even on a different level (interior or roof), whereas other bandits are limited to targets on the same level in different cars. Cheyenne immediately picks up a dropped purse when punching another bandit instead of requiring a separate action, and so on.

Each game lasts five rounds, represented by randomly selected round cards. Each round card specifies a variable number of turns consisting of Schemin’ and Stealin’ phases, plus potentially some special events such as forcibly moving certain bandits. These events are known in advance and so represent another obstacle or opportunity that players must plan ahead for.

Colt Express is an outstanding game design. The separation of planning and execution phase is reminiscent of robot battles. The mechanics are easy to learn, yet the handful of orthogonal actions offer a surprisingly large space of possible outcomes. And these mechanics perfectly match the strong setting, a rare feat among European board games more often known for Knizia-style mathematical abstractions. Colt Express is highly recommended to anyone with an interest in digital board games.

One thought on “Colt Express Review”