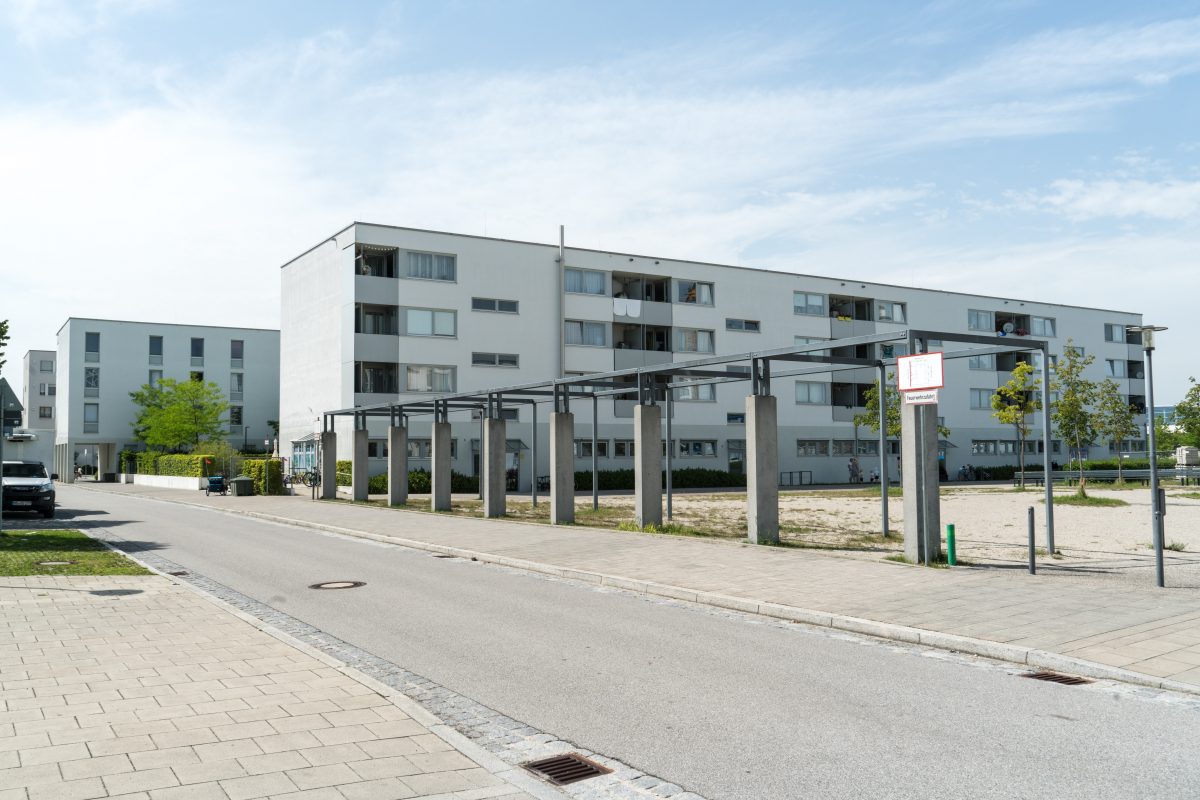 Riem is a small farming village to the east of Munich which was eventually engulfed by the expanding city and became a district. Rather than immediately urbanizing the area, a large open space to the south of Riem was dedicated to Munich-Riem airport in the late 1930s. The airport continued operation until 1992 when the much larger and more remote Franz Josef Strauß Airport opened between Freising and Erding. (I recently took some pictures of an airplane exhibition there.)

The northern half of the old airfield became Munich’s new trade fair location (Messe München). This post covers the southern half where an ambitious residential and park district was centrally designed from scratch starting in the 1990s, with some construction still ongoing. The intention was to improve upon the notorious concrete towers of the 1960s and 70s, exemplified in Munich by older parts of Neuperlach. The official website contains many proud documents on the planning and building process.

I find the results rather unconvincing. To achieve the desired population density, many continuous blocks of low-rise buildings were created, resulting in a look similar to army barracks or industrial districts. Moreover, the obsession of architects and landscape designers with rigid simple geometries created a highly artificial appearance, as if alien robots had attempted to design logical living spaces for carbon units. See this Google Maps satellite picture:

Another repeated mistake was the near-total lack of shops, restaurants, or any lively communal places at all in the large residential areas. The single go-to spot for such activities is the Riem Arcaden shopping mall. The residential areas feature instead a few pithy meeting centers for lonely inhabitants – as sure a sign as any that community design has failed.

To be fair, not all of Messestadt Riem is terrible. Some smaller houses have a pleasant modern villa look, surrounded by not-too-artificial green spaces. I included a few samples in the galleries below. They are certainly the exception, though, and even if you were to live in one you still must face the daily horror of traversing a maze of endless straight passages between white rectangular blocks, all alike.

(Never mind the embarrassing street names which show just as clearly as the rigid geometries the designers’ socialist inspirations. Would you want to live near a “Place of Human Rights?”)

From an artificial hill in the adjacent Messepark (see below), one has a good view on the entire eastern front of the residential Messestadt. Click on any picture to enter a full-screen gallery view with Exif data.

Photography Notes: I took all pictures with a Sony Alpha 7R II and Sony SEL-24240 lens, plus a polarizing filter and post-processing in Adobe Lightroom to equalize the brightness.

2018-05-27: Moved two pictures covering Riem Arcaden and the Messe lake to a new gallery devoted to that area.

Next we go down into the streets and see a number of typical housing blocks, mostly residential but including a few communal buildings. With some exceptions, these perfectly straight streets are remarkably monotonous. It’s easy to get lost here.

Here are close-ups of a few particular houses. The first is simply depressing. The second is remarkable for the strong resemblance of its balconies to Matrix pods. The third shows bizarre one-story protrusions above the entrances, because why not? The fourth has no proper window blinds, instead the ground floor gets rickety plastic shutters! The fifth is one of the few nice houses, in mediterranean villa style. Lastly, the sixth shows a resident’s flag of the “green” eco movement. Riem features some pioneering zero-energy houses – nothing wrong with that, but it doesn’t inherently make them any prettier.

Messestadt Riem includes a large number of generous public spaces. Unfortunately, they are mostly just that: empty rectangular spaces between buildings, with no particular enticement for humans to linger. The rectangular iron-and-concrete skeletons in pictures 3–5 are the designers’ idea of romantic alleys. Pictures 6 and 7 show the cheerful playgrounds for happy Messestadt children.

Messepark is an artificial but generally pleasant recreation area. Its one big problem is the designers’ addiction to geometry. All paths are perfectly straight and seemingly interminable, occasionally intersecting at precise geometric angles. If you want a vision of the future, imagine recreational walking paths going on in a perfectly straight direction, forever.

Within Messepark lies the Riemer See, or Bugasee as it was created for the 2005 Bundesgartenschau (gardening exhibition). This lake, sized 800×150 meters with a depth up to 18 meters, is entirely artificial. There are no natural streams nearby, so three pumps continually lift ground water into the lake’s concrete basin. Its shape is, of course, highly geometrical, with straight lines meeting at clearly defined angles.

Although intended for bathing, the lake features no trees or anything else providing shade near the shores. Moreover, visitors report that the lake is unpleasantly cold, due to its groundwater source, except in the very hottest days of summer. Nearby is an obviously artificial stand of trees, and the obligatory modern “art” (the designers’ idea of a perfect tree?).