Through the Ages is the eagerly awaited digital adaptation of Vlaada Chváti’s card behemoth which in turn is basically Sid Meier’s Civilization but with cards. Through the Ages is available for both iOS and Android (and now also Windows, see below). I’ve mostly played on iPad Pro where the app is just about perfect from a technical perspective: beautiful, responsive, easy to play (once you understand it!), and with a very capable AI.

The screenshot shows a typical mid-game situation where I’m struggling with insufficient production, as usual. The layout is virtually identical on iPhone, using mandatory landscape orientation. While the game is certainly playable on phones, it won’t be fluid until you’ve memorized the card effects. They are too small to read without tapping on cards to magnify them. 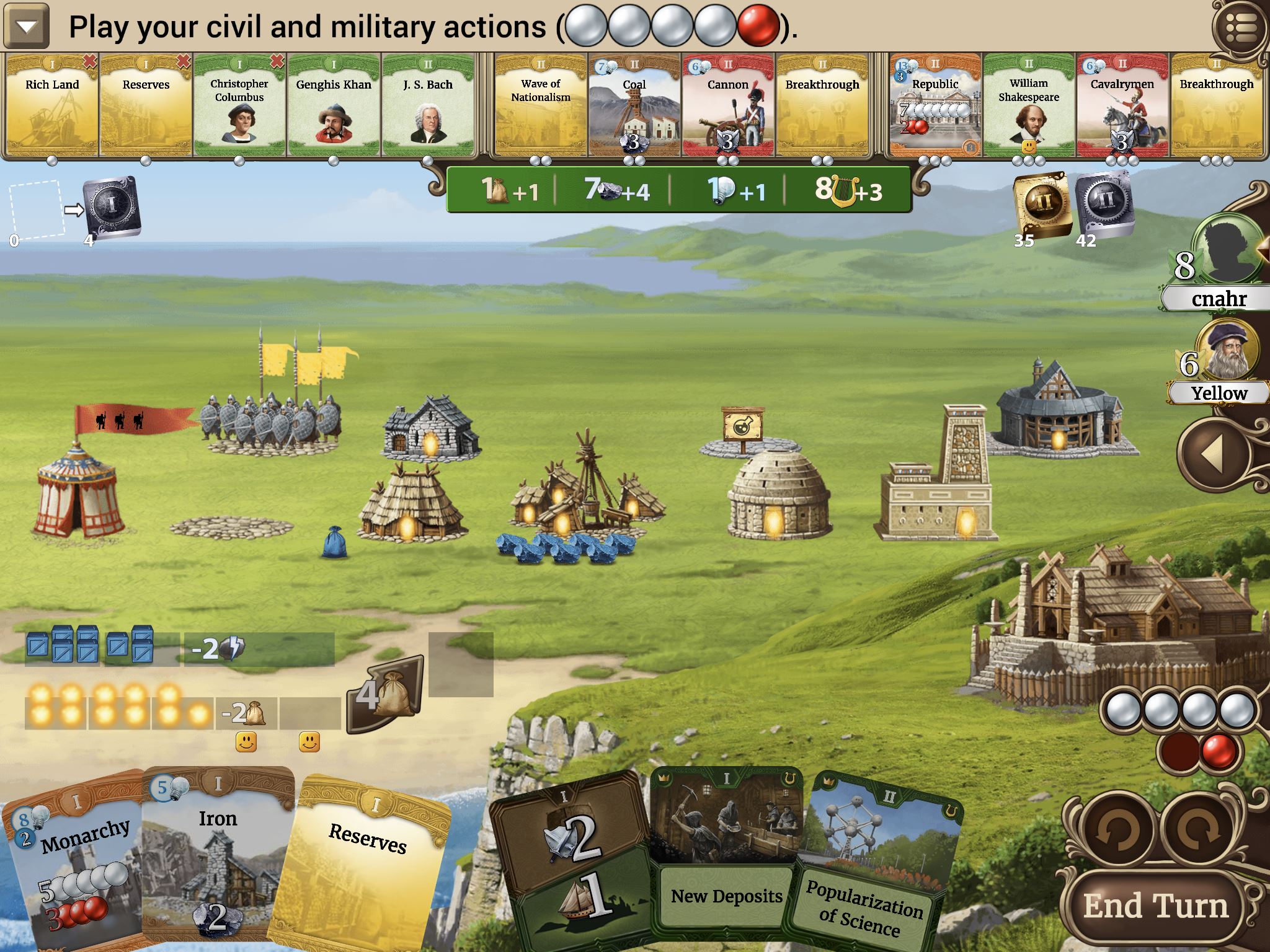 Unlike the greatly simplified (but still very good) Battle of Polytopia, Through the Ages preserves an amazing amount of genuine Civilization complexity. You must manage four different production outputs – food, resources, knowledge, happiness – as well as your civilian and military population, plus culture which provides victory points. You can even install leaders, build wonders, make pacts, and declare war. The major Civilization feature that is entirely abstracted away is territory. There are no distinct cities, although you may conquer colonies for various bonuses.

One drawback of the complex gameplay is that Through the Ages is correspondingly hard to learn. The app’s built-in tutorial is amusing but not terribly helpful for new players. However, the app does have an extensive hyperlinked rulebook (under “Extras”) which you should study. You might also want to get the original PDF downloads at the board game website, two of which are linked from the in-app rulebook. Once you have a grasp of basic gameplay you should read David Neumann’s strategy guides on resources, corruption, and wonders.

Some notes on available game modes. The standard Civilization-style randomized game is available under “Custom Game” which I’ve played exclusively so far. There are also scripted single-player challenges, the aforementioned tutorial, and multiplayer on the same device or over the Internet. The formidable AI can be set to one of three levels. I still cannot win consistently against the weakest level, yet have seen nothing so far that would hint at cheating.

Thanks to its original design as a board game with inherent limit on physical components, Through the Ages cannot afford to indulge the thoughtless tonnage ideology of the computer-based Civilization series. The entirety of a Through the Ages match plays like the early game in Civilization: a constant struggle to make ends meet, with limited actions per turn and difficult decisions on what to spend where. There is no equivalent to the boring busywork of late-game Civilization where you just research and build everything that’s on offer since you both can and must.

Before even considering population and production outputs, your options are limited by two factors: the cards you already own or can currently obtain; and the number of civil and military actions still available during the current turn. The latter are largely determined by your current government. New governments are among the cards that become randomly available in the top row. They can be taken if you have sufficient civil actions, and installed if you have sufficient science points – or are will to spend all your civil actions on a revolution.

Most cards come into play from the top row. The major exception are military cards which are dealt for free from a separate stack and can be activated using a single political action per turn. They include immediately resolved cards such as raids and pacts, but also events are placed in yet another separate stack on activation. These are resolved later, in a random order – and by whatever random player happens to draw them.

At first blush, food and similar variables work in a familiar straightforward manner. The higher your level of farm/mine/laboratory, the more food/resources/science you get per turn and worker placed there. The same applies to culture and happiness which are produced in various combinations by specialized buildings, such as temples. Workers come from the area with yellow dots, consuming food each turn and also requiring progressively more food to create.

Science and culture are tracked by simple counters, but the other variables are more complicated. Production markers for food and resources come from the area with blue crates. Observe the lightning bolt symbol in the screenshot above. That’s corruption, indicating how many resources simply evaporate each turn (i.e. are returned to the blue area). The number gets higher the more blue markers are already in play, and similarly more active workers will consume extra food beyond their numbers.

The net effect is that you must upgrade your buildings as quickly as you can. You cannot afford to accumulate a lot of resources over many turns with primitive mines – you will lose a large share, making the wait even longer. Ideally you want to produce as many resources as you can spend each turn, keeping the blue area mostly full between turns so as to minimize corruption.

Aside from the more obvious food consumption, the yellow population area has another special tracking mechanism: happiness. The more workers are in play, the emptier the yellow area gets – and the more unhappy faces appear. These must be balanced by happiness production, else an uprising occurs that will cancel all production for the current turn.

Military affairs are relatively simple. You start with a warrior card and can spend military actions plus resources to place workers on it, indicating available warrior units. New unit types appear in the top row as technologies that can be researched. Tactics cards from the separate military deck give bonuses for certain unit combinations, and of course military leaders provide various bonuses as well. All this adds up to strength scores for each player that are compared when military actions are performed. Alternatively, you can exchange units for colony cards with production bonuses.

So much for a brief outline of Through the Ages. (Yes, there are also four ages but they just comprise different card stacks.) If your head is already spinning don’t worry – with an app to keep track of all the cards and counters, most of the gameplay becomes intuitive rather quickly. I honestly wouldn’t want to play the incredibly cumbersome original board game, but I can wholeheartedly recommend the digital version to anyone interested in mobile 4x games.

Addendum 2020-01-21: Since 2018 the game is also available on Windows via Steam and Good Old Games. Multiplayer and synchronized achievements etc. are handled through a publisher account so it doesn’t matter which one you get. The tutorial is much better than what I remember from the original iOS release, and there’s now also a new “Training AI” level with one less action per turn to ensure that newbies can actually win custom games.