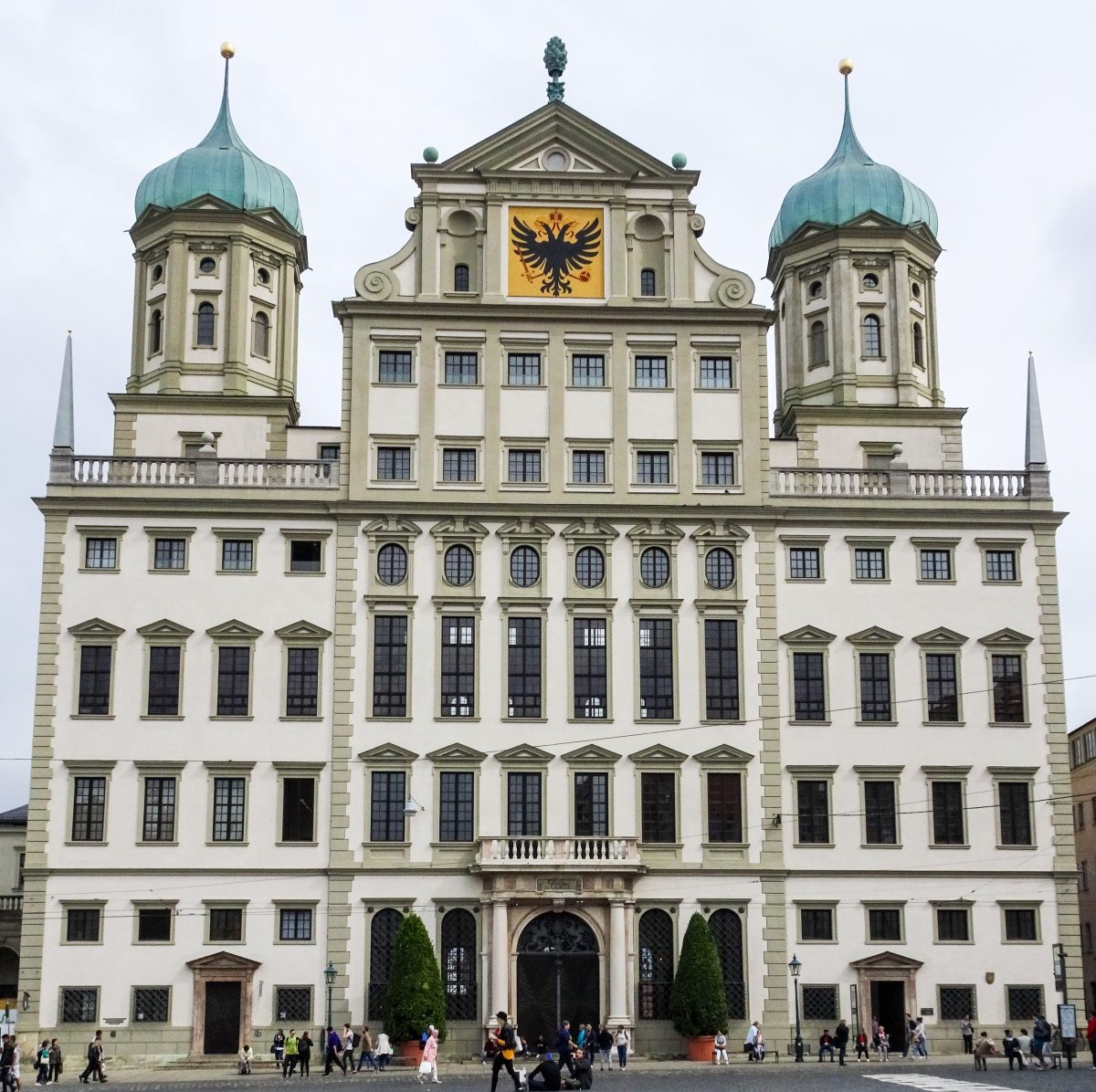 Augsburg (more information in German) is among the German cities with the oldest documented history of continuous settlement. Orginally founded in 15 AD as a Roman army camp, it developed into a provincial capital called Aelia Augusta and later Augusta Vindelic[or]um. The town appears to have remained fully populated throughout the later transition from Roman to German rule, and then steadily grew in importance and wealth until reaching its peak in the 15th through 18th century. Most famous among its many patrician families were the immensely rich Fuggers and Welsers.

This long history of concentrated money produced an equal concentration of splendid historical architecture, often even preserved all the way back to medieval times. Although some buildings are in pretty bad shape, many have been nicely restored. If you wanted to photograph every pretty old building in Augsburg you’d get hundreds of pictures. I used the Sony DSC-HX90 for the samples below as I didn’t plan on taking indoors pictures, although I managed a decent one anyway. Click on any image to enter a full-screen gallery view with Exif information and descriptions of each subject.

Unlike the smaller towns I usually like to tour, modern Augsburg is a fairly substantial city of about 290,000 inhabitants. That invites a comparison to Munich (admittedly five times larger at 1.46 million), as both are big tourist destinations with lots of money and plenty of historical architecture. But it turns out that their character is quite different, and not in Augsburg’s favor. Read on for some idle complaints, or else skip ahead to the galleries.

First, beyond its beautifully restored showcase pieces Augsburg is just plain ugly. Unlike in Munich there was never an ambitious prince who redesigned large parts of the city, nor did modern city governments seem to care. Housing appears almost entirely controlled by private owners, then as now. This did have the positive effect that medieval structures have survived in much greater numbers than in Munich, even in the city center. The flip side is that you see both a large number of dilapidated houses badly in need of restoration, and far too many faceless concrete boxes — even right in front of the main square facing the town hall.

Munich’s strict city planning prevented this. No house in the historical core decays to such a degree, and new constructions must fit into the existing ensembles. Outside of the historical center, Munich still often has harmonic ensembles and elegant architecture for modern buildings large and small. In Augsburg this seems to be a rarity. What I saw of the outer districts from the train were dismal agglomerations of cheap nondescript low-rise buildings with no discernable aesthetics. Again, I only saw fractions of the city, so there may be some decent quarters elsewhere.

Augsburg might not care for city planning but they sure love their cars. The nominal pedestrian zone in the historical center is quite small, and the car ban is not consistently enforced. When I looked at an official city map, I was quite surprised to see that streets where I had experienced significant vehicle traffic were supposed to lie within the pedestrian zone. Moreover, many of the narrow medieval streets that Augsburg has retained are open to through traffic. Pedestrians squeeze past each other on tiny sidewalks as cars and trucks barrel down the road. Historical cities are supposed to be walkable – but for that you have to actually ban cars. Munich does a much better job at keeping cars out of pedestrians’ way.

There some other (and even more snobbish) issues for which Augsburg’s city government is probably less to blame than the proximity to dominant modern Munich, just half an hour away by train. On the main Maximilian street, glorious former patrician palaces mostly house cheap chain outlets and high schooler dives. The central streets and plazas were curiously empty on a pleasant Monday afternoon, as if no one sees any reason to go there. Perhaps Munich has simply sucked Augsburg dry of the sort of people who would care about a proper city center. It’s rather a shame.

We enter the city core through the southern gate in the medieval wall, called Rotes Tor (Red Gate) for obvious reasons. Directly adjacent are the communal waterworks with Germany’s oldest water tower. Some way north lies the basilica of St Ulrich and Afra where the city’s patron saints are buried.

This street leads north from the basilica to the town hall. It is by far the widest in the city core and lined with patrician palaces, including those of the Fuggers and Welsers. I also included some pictures from nearby streets in this gallery.

The gigantic town hall dominates Augsburg’s central plaza which also features the Augustus fountain, celebrating the city’s Roman founder. Unfortunately the sight is rather spoiled by some remarkably ugly modern concrete boxes around the plaza.

The cathedral north of the town hall, Dom Mariä Heimsuchung, was built in the 11th century but extended in the 14th century. Unusually, the older part was not redesigned to match the newer one, so the cathedral looks like two distinct buildings sitting side by side. This gallery also shows the prince-bishop’s nearby palace complex and the Roman ruins discovered in front of the cathedral.

Finally, we make an excursion east to the famous Fuggerei poorhouse. The picture only shows the front entrance; the entire complex is the size of a small town. Going back west to the central station I found the Church of the Holy Cross, so there’s some pictures of that too.