It’s blue! It’s handsome! It’s the laptop everyone loves! Like apparently a lot of other people I got a Microsoft Surface Laptop 2 last week, as I once again needed a portable Windows device. So far my impressions are very positive with the exception of a horrendous Windows update experience, which will probably surprise no one. Click on the image below to see a high-resolution version, though unfortunately the beautiful Cobalt Blue color isn’t really visible in the pictures. 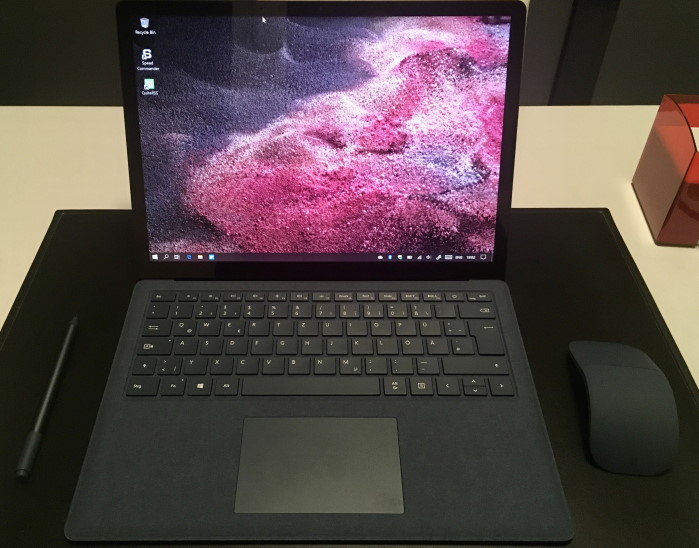 But first, about the pricing and the concrete devices I got. Microsoft’s German website names absolutely outrageous regular prices for its Surface products which I suspect are never actually paid by anyone, in the usual manner of fake retailer markdowns. At any rate in the weeks preceding the latest Surface event, there was a nice bundle deal that cut down prices to reasonable levels. For less than 1500 euros including 19% local VAT I got the following:

One big attraction of pricey Microsoft computers over cheaper brands is that there is no crapware, and I can confirm that. There is one specific Surface app but it just offers some extra help and configuration options and never gets in your face. No horrible McAfee or Symantec garbage, no custom system management software that nags you to register your device, nothing whatsoever. Frankly if Microsoft can keep selling devices at competitive prices all other Windows laptop makers deserve to go out of business on that account alone.

What About Surface Laptop 3?

Shortly after I bought this Surface Laptop 2 Microsoft held its annual Surface event which included an announcement of the successor model. You can find a good overview at Anandtech. Although the Surface Laptop 3 is of course once again improved I’m not too sad to have missed out, as most changes were rather marginal.

Let’s start with ports. Surface Laptop 2 was rightly criticized for its dearth of ports but Laptop 3 is barely any better. All it does is replace the Mini Display Port with one lonely USB-C port. I guess Microsoft really likes selling its overpriced Surface Dock units after all. (No, I didn’t get one of those as I don’t really need it.)

Screen, camera, and speakers (with Dolby Audio Premium) appear to be completely identical. The keyboard has slightly reduced key travel and the touchpad is a bit bigger, but in both cases Laptop 2 is just fine for me. The Intel CPU got bumped from 8th to 10th generation and RAM went from LPDDR3 to LPDDR4X. Both changes should somewhat improve computing power, but probably not that much outside of benchmarks.

One substantial difference is the integrated Intel GPU which went from UHD 620 to the much more powerful Iris Plus G7. However, since it’s still an ultraportable laptop with a relatively weak CPU and limited disk space I’m not sure what this extra GPU capability is good for. I certainly don’t plan on playing demanding games on that device, I have a desktop for that! Then again, I don’t have the device and welcome corrections if it’s actually capable of such things.

A new addition to the Surface Laptop 3 lineup is a 15″ screen model that’s powered by an AMD Ryzen 5/7, based on the Zen+ CPU and Vega GPU architecture and co-designed by Microsoft. This should be the version that’s most suitable for graphically intensive applications, though we’ll have to wait for reviews on that. The latest devices are certainly worth considering, but if you can get the previous revision substantially cheaper and don’t mind the inferior GPU that’s probably the best bang for the buck.

There was some talk online that Microsoft has recently intensified its war on Windows 10 offline accounts. I can neither confirm nor deny that since I took the simple expedience of not connecting to WiFi until after setup was complete. If you do that Windows 10 has no choice but create an offline account, and if you don’t want password security either you can just leave that field blank and continue.

Windows Update initially downloaded fixes for Windows 10 version 1803 which was the April 2018 update! Now Surface Laptop 2 launched in October 2018 and the next feature update, version 1809, wasn’t out until November 2018, so for the initial production run this was just unlucky timing. But there is simply no excuse to ship a device in late September 2019 that’s still running on April 2018 software.

Yet this is exactly what Microsoft did. Even the current feature update 1903 was released as early as May 2019 and could have been easily incorporated into a recent production run. Obviously Microsoft simply couldn’t be bothered. As further evidence that absolutely nothing was updated since the initial production run, Windows Update also downloaded multiple system software and Intel driver updates, all dating back to mid-2018.

Wait, it gets better. During the update process Windows clearly got confused between feature update 1903 trying to install itself and various system/driver updates that took precedence. Not once but twice everything ground to a halt with a stern warning dialog that I must restart my system right now to continue updating. Except that there wasn’t any option in the dialog to actually restart — possibly because it wanted a fully charged battery and mine was still only at half charge. Which shouldn’t have mattered of course since the laptop was plugged into a power outlet anyway, and which ultimately didn’t matter when I forced a restart from the Start menu, against another warning saying that the same update dialog that prompted me to restart was preventing a restart!

The best thing I can say about this absurd Frankenstein update process is that in the end, everything actually worked. Still, it’s the worst device setup experience I’ve ever had. On what’s supposed to be a Microsoft premium showcase device that’s inexcusable.

Cleaning up the Update

Total disk space to recover with Disk Cleanup after the whole ordeal: 2.93 GB for Windows Update proper — plus 745 MB just for Windows upgrade log files, and 877 MB for obsolete device driver packages, and another incredible 2.09 GB for obsolete language resource files, and no less than 44 GB for previous Windows installations! No wonder it took four hours. Total amount of junk to delete was 50.7 GB after just one day of updating, or a fifth of the total SSD capacity.

Deleting such massive amounts with Disk Cleanup is always notoriously slow. Here it took almost exactly an hour, on top of the insane update time. Oh, and of course you have to know about the old Win32 Disk Cleanup app in the first place which I guess most people don’t. There was also a 3.81 GB system restore point for the latest Windows feature update which has to be deleted manually from restore point management if you want to reclaim that space.

In February 2020, I still like my Surface Laptop 2. The device is so quiet most of the time, you wouldn’t guess it has a cooling fan at all. And while not a gaming machine it does competently run the Steam versions of Through the Ages and even Rise of Nations. Sadly the Alcantara cover did get scraped off in a few places which some reviews were warning about, but it’s merely an aesthetic issue. Mechanically and electronically there are no defects whatsoever.