A proper implementation would take a lot of work, as the existing Swing infrastructure based on JToggleButton simply does not support more than two states. You can find an experimental attempt in an old JavaSpecialists article, and that wall of code does not even include drawing a proper null state icon. (I did crib the trick of showing all installed Look & Feels from that article, for my test application shown below.)

However, I found a clever and frankly outrageous hack submitted by an anonymous user on Stack Overflow. Instead of designing a new checkbox class, it is possible to emulate tristate behavior by simply attaching a custom ActionListener to a regular JCheckBox! Building on that, here’s my complete TristateActionListener class, with Javadoc comments elided for brevity. Note how actionPerformed cycles through the three states, using a custom null state icon not only for display but also as a marker for the third state, returned by getState as a null Boolean.

Compared to the Stack Overflow code, I fixed a bug in getState and added the setState method, as well as the drawing of the null state icon, based on the supplied or current Look & Feel. The result is not aesthetically perfect but good enough for my purposes. Here is a screenshot of the test application that shows the null state for all installed Look & Feels on my Windows 10 system. 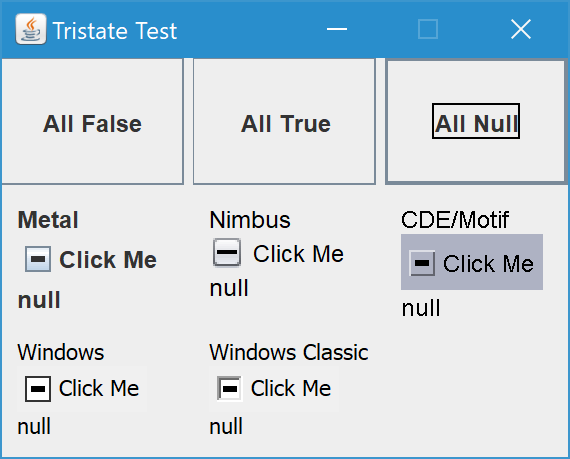 You can download the complete source code for TristateActionListener and the TristateTest application, both with extensive Javadoc comments, as TristateCheckBox.zip. This package also contains the corresponding pre-created Java class files (targeting JDK 8) and Javadoc pages, all organized as a project for IntelliJ Idea 2022.1.2 with JDK 10.0.2.

However elegant, this hack is not without its shortcomings. They are detailed in the Javadoc comments, but aside from various visual inconsistencies the most important is that TristateActionListener itself changes the state of the attached JCheckBox. This means that any additional ActionListener that wants to react to a state change must delay that action using SwingUtilities.invokeLater, or else it would see an outdated state. Also, since the custom icon is used both as image and marker of the null state, you cannot use any custom icons of your own.

Finally, the test application revealed a weird internal JDK bug on my system (Windows 10 with JDK 10.0.2). Using multiple Look & Feels in the same application evidently can get some of them confused. The standard JCheckBox icons of Nimbus – not my custom one! – appear with the wrong background color (a shade of green). When using Nimbus as the only Look & Feel, the bug disappears.

Update 2022-06-12: Version 1.1 adds the setState method which I had forgotten in the initial release, and three buttons in the test application to verify that it works.