Ubisoft’s Assassin’s Creed games are third-person action-adventures with lavish historical settings and an eclectic mix of arcade combat, stealth, and role-playing elements. The titular assassin refers to a conflict since times immemorial between “Assassins” and “Templars.” The Assassins with their creed of “nothing is true, everything is permitted” are anarcho-libertarians whose goal is to bring about peace and prosperity by killing a lot of people, in stark contrast to the statist hierarchical Templars who want to bring about peace and prosperity by also killing a lot of people, just different ones. Obviously you’re playing an assassin rather than a templar because it’s a better fit with gamer sensibilities and gameplay requirements.

There’s also a vague X-Files style alien background to all that, believe it or not. While occasionally entertaining, the meta-backstory of the whole series is really a bunch of nonsense going nowhere (just like X-Files), further complicated by a present-day meta-meta-story where the assassin character is actually the historical incarnation of a regular guy or girl hooking into “genetic memories” through a science-fiction VR device. That last part is so obviously pointless and unpopular with players that Ubisoft increasingly cut down on those modern-day sequences until they now only make brief token appearances, much to everyone’s relief.

While I’m piling on criticism I might as well mention the combat system. The very first Assassin’s Creed in 2007 was created by fans of Japanese arcade fighters and consequently had minimal RPG features but instead required perfect player reactions if you wanted to win any fights. Given the Western audience for historical action-adventures this also proved to be quite unpopular. The combat system was massively watered down in subsequent iterations, becoming more forgiving and more easily gamed by improved stats and gear. These are not RPGs, though: stats and gear tend to max out quite early, and then your skill with the controller is still the only thing to keep you going. Relatedly, while there are pretty solid RPG-style quests you cannot usually make any decisions to influence their outcome.

Finally, Ubisoft wants to remind everyone that they are Canadian by proudly proclaiming in every intro that “this game was created by people of multiple ethnic and religious backgrounds,” lately adding “multiple gender identities.” I expect we will soon see “multiple furry costumes” too. Fortunately this social justice garbage has rarely spilled over into actual game content, the notable exceptions being the anti-European slant of the first installment and same-sex romance options in the latest one.

So what is actually good about these games and why did I enjoy a bunch of them? Most importantly by far, they are peerless open-world recreations of vast historical areas with splendid graphics, featuring a ton of realistic explorable architecture. These worlds are alive, too: cities are full of inhabitants going about their business while large groups of animals roam the countryside. You cannot really interact with all those random nameless NPCs, of course, but their presence creates an impressive feeling of reality compared to most RPGs.

There is also one gameplay mechanic that was great even in the first iteration: a unique movement system with generous stealth features. Unlike most other action games, movement requires minimal player input (basically just indicating a desired direction) and prevents you from falling to your death unless you try really hard. This caused some initial criticism but ultimately the series is enjoyable largely for majestic views obtained by astonishing acrobatics, and if that was dependent on player skills its audience would be a lot smaller.

So if you want challenging jumping or fighting you’ll want Japanese console games, and for fully fleshed out RPG mechanics in first person perhaps the Elder Scrolls series. But for exploring historical locations in approximately realistic size and detail, Assassin’s Creed reigns supreme.

The Series So Far

The series had no less than eleven main installments to date, plus some spin-offs that were generally poorly received and which I’ve ignored. So here is an overview of the big releases, including whether I played them and what I think of them. The most recent one I played (and liked) was Origins which prompted this brief retrospective and is reviewed below.

All that was said above about the second and later games in the series applies to this one, too. So what is particular about Origins? The obvious first point is the unusual setting. Ptolemaic Egypt at the time of Julius Caesar provides a rich tapestry where traditional Egypt, largely in the countryside, clashes with Macedonian settlers and innovations, such as the metropolis of Alexandria (shown in the screenshots) or the cross-cultural god Serapis, as well as recent Roman incursions culminating in the famous meeting between Cleopatra and Caesar. 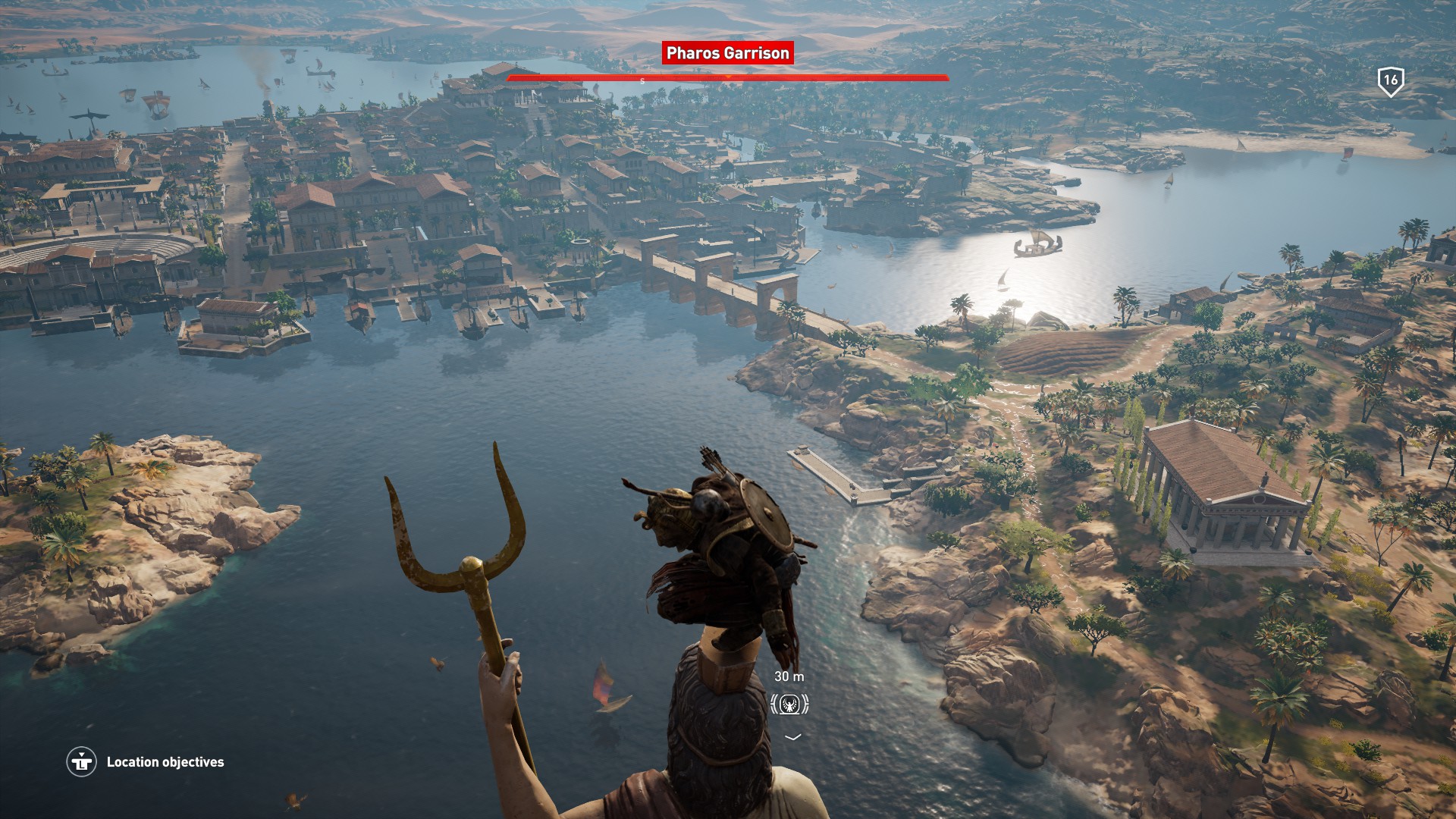 Alexandria, view from the top of the Pharos

Contrasting to this realm of high politics is the player character’s background. Bayek of Siwa is basically an ancient Egyptian rural policeman, known as Medjay. The Macedonians had usurped internal and external security at this point, so Bayek is the last of his kind. The policeman profession connects to a number of quests where Bayek solves various minor and major crimes by collecting clues in areas of investigation, sometimes in opposition and sometimes in cooperation with the Macedonian forces.

As another novel twist, Bayek has a pet eagle that can survey nearby areas and spot persons or locations of interest, an ability that is improved by Bayek’s climbing of lookout posts, a staple of the series. Also specific to Origins are quests to visit stone circles throughout the land in order to align star signs of Egyptian gods; to defeat a number of exceptionally strong Phylakes bounty hunters that roam Egypt; and to retrieve and solve papyrus puzzles that hint at treasure locations. 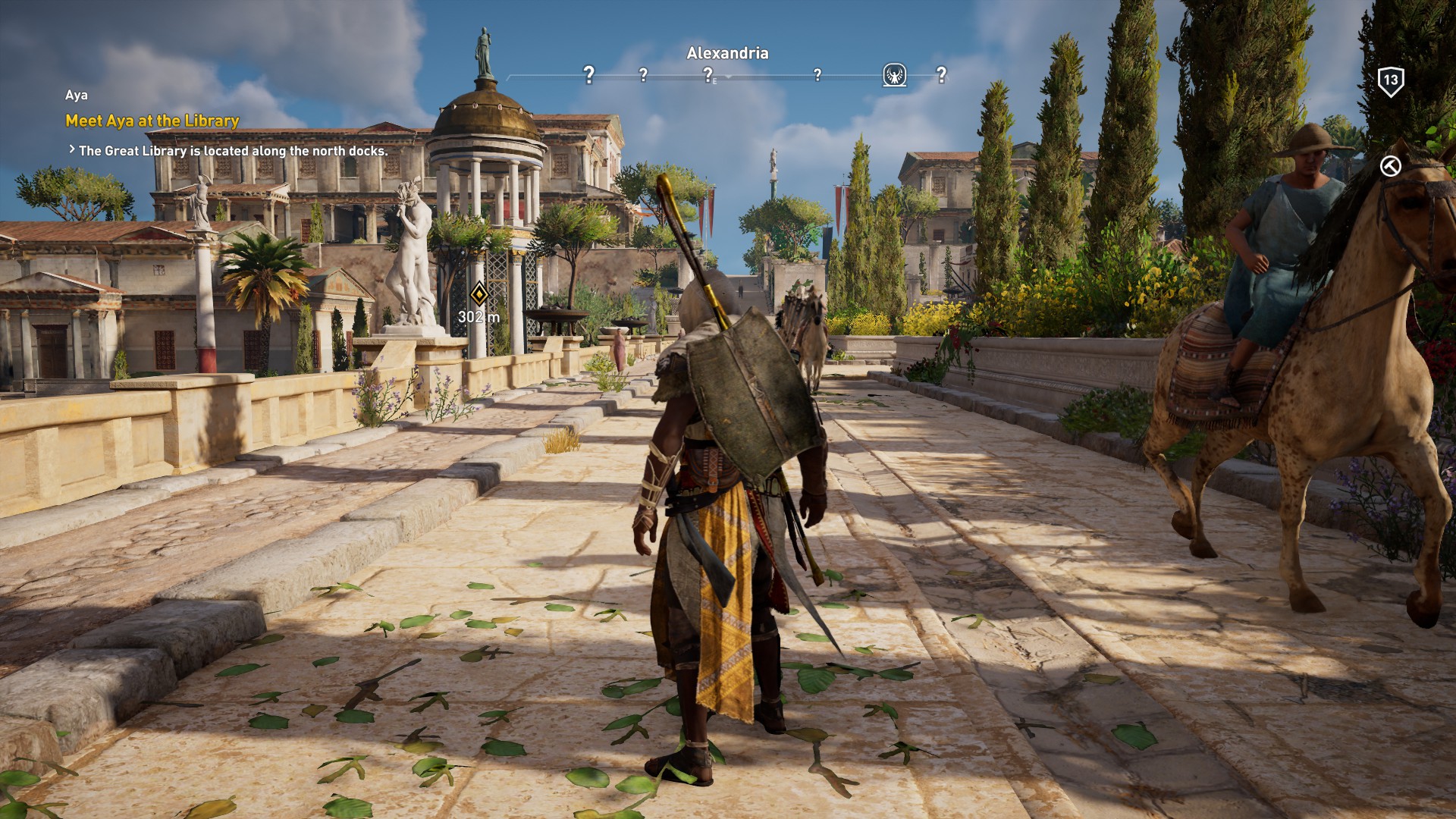 The Great Library of Alexandria

The rest is a straightforward but solid mix of previous features. Pyramids and other tombs are climbable and lootable, there are the requisite mysterious alien locations, and the sequences concerning Roman politics feature maritime battles reminiscent of Black Flag. There are also many other entertaining side quests that don’t feature criminal investigations, as well as tons of minor challenge locations ramping up all the way to arena fights with war elephants!

My criticisms are minor and mostly confined to the usual issue that levels and equipment max out long before the end of the game. There is one additional oddity in Origins, namely three desert areas to the southwest that are almost completely empty, never addressed by any quest, and frankly pointless to visit. Apparently they were just put in for flavor, or to round out the more or less rectangular map of northern Egypt. But you can simply ignore them, so it’s not a big deal.

The Pharos lighthouse of Alexandria

If you have any interest at all in the ancient world, Origins is a great showcase that brings out the best of the series as a historical sight-seeing tour, with some added improvements to boot. Highly recommended – if you can spare the 80+ hours it takes to complete the game!